THE BIRDS ARE COMING!

Last Sunday morning we headed over to one of our favorite places to visit, Ruthven Park. The grounds are lovely and they are home to a bird banding station run by some great people. The banding station was open and it was a beautiful Spring morning to walk the grounds. We saw well over 30 species and with migration well under way we saw many birds for the first time this season:

Though a pair over wintered at the park, Rob was pretty excited to see and hear many different Eastern Bluebirds on the property this trip, they are one of his favorite birds.

Rick, the chief bird bander at the park gave us directions to an area to see some Bonaparte's Gulls, that were heading north for the summer. Having never seen them before we went in search when we left the park, and we found them! 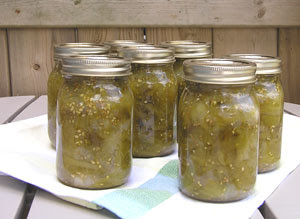 There was a rocking chair in the kitchen in the house I grew up in. I could look out the window, but also watch my Mom prepare meals, bake pies and make pickles from that chair. I can almost smell all those wonderful smells as she did her magic on the wood-stove. I loved passing the time there, rocking away and watching her.

Last night I emptied the last bottle of "Green Tomato Chow" Mom gave me. I ate it the way I loved, piled on top of buttered mashed potatoes, it was delicious, as was most of the things my Mom made or baked, don't get me started on her pies!

When I came home from work this afternoon, I noticed Rob had washed out the mason jar, and it was drying in the dish rack, it made me a little sad.

It's two years today that my Mom was diagnosed with terminal brain cancer, and she passed nine months later. It's been many, many years since I rocked in that rocking chair watching my Mom and I will never again taste her cooking, but the love I have for her is as strong as ever, as are the memories, and they see me through.

Footnote: When I was looking for an image of "Chow", I actually found a recipe for "Nova Scotia Chow Chow", who knows, maybe I'll give it a try, Mom would like that.

NATURE, GOOD FOR WHAT AILS YOU!!

I've been home for over a week recovering from a respiratory infection. I am on the mend and returning to work tomorrow, ready or not. Rob dragged me out of the house kicking and screaming this morning for some "fresh air".

I'm glad he dragged me out, we had a great outing at one of his favorite places to visit, the Humber Arboretum. We were treated to many fine sightings including a Yellow-bellied Sapsucker, it was only my third time seeing one! We saw our first warbler of the year, a Yellow-rumped Warbler. We saw many Golden-crowned Kinglets, but we had never seen them with their crown on display like we did today. We also hand fed some hungry Chickadees, watched a couple deer stroll by us, and found a raccoon sleeping in a tree.

I gotta remember how much better I feel mentally after a walk in the woods the next time I tell him I don't feel like going.
Posted by Angie in T.O. at 7:38 PM 1 comment:

When I entered the room for my VIP Meet & Greet with Def Leppard in Las Vegas on April 3rd, it was pure euphoria.

I was literally dancing on the spot in my brand new, red, Chuck Taylor sneakers as I stood facing the band.  I was suddenly 12 years old again, and it was like my bedroom poster had come to life. Those were also the first words out of my mouth, gaining me a chuckle from the band.

I had never done a VIP Meet & Greet before and didn't really know what to expect. I did not expect to be alone in the room with only them and the photographer. (Helen, Phil Collen's wife, and the best VIP Nation hostess ever, was also the photographer)

I suddenly found myself telling them that I got married at the end of November and being able to fly down to Las Vegas for a couple days to do the VIP thing with them was a wedding gift from my husband. I guess because their music has been such a huge part of my life for over 30 years, I wanted to bring them up to speed on mine.

I think all music lovers have that one band that they consider "their" band, and Def Leppard is mine. I was 12 years old the first time I heard a Def Leppard song, "Foolin", and as silly as it sounds, my life changed. I discovered rock and metal music because of them, and back then, music wasn't just something you listened to, it was the way you dressed, your attitude and a part of you.

As I walked up to the band I suddenly had a moment of clarity, and I stopped. I have a bad habit of saying out loud what I am thinking, and I did. I put my head down and said, "Wait, I have to say this" and getting a little teary eyed I said to the band, "Your music has been a friend to me since I was 12 years old."

I spoke to them all, even telling them my most embarrassing moment, which happened to be with their drummer, Rick Allen, on the Hysteria Tour back in 1988 in Halifax, Nova Scotia.

I've been lucky enough to meet a few members of the band over the years, but this was one of the most memorable, amazing and surreal experiences of my life, and I will never forget it.

Please enjoy a few photos my friend, Brian, took at the awesome concert that night.

I flew to Las Vegas from Calgary early on April 2nd for a short 2 day/2 night stay. It wasn't really a "Vegas" trip in my mind, as I was really going for the Def Leppard concert the following night.

This was my first trip to the city and unfortunately I wasn't feeling the greatest. Even so, I did manage a couple trips to the "strip", played a few slots and enjoyed myself as much as a could under the circumstances. I stayed at the Hard Rock Hotel, and felt right at home there, having stayed at their Orlando location a couple times.

Las Vegas is a wild and wacky city, and I look forward to a return visit. I loved all the people dressed up as different characters along the strip, enjoyed being able to drink where ever and when ever and just the over all atmosphere of the place.

Brian and I were pumped for the concert and the whole VIP Meet and Greet experience, blog and pictures to come.
Posted by Angie in T.O. at 3:46 PM 1 comment:

This Easter was a special one, as it happened to fall close to a birthday and it was also the first time Rob met my older brother, Jeff and his family.

My niece, Ashlee, turned 13 on the Wednesday before Good Friday, so I flew out early that morning so I could spend the day with her. She gladly stayed home from school and after my brother picked me up at the airport, Ashlee, her Mom, Sandy and I did some shopping and had lunch together.

The birthday supper was homemade pizza at her request and it was a fun, family affair at the house with cake and presents.

Thursday was "Tayler Day", as it was my 7 year old nieces turn to stay home from school. After a relaxing morning of lounging in our PJ's, we also went shopping and had lunch out together.

Rob flew in the morning of Good Friday and we were all there to meet him at the airport. After returning back to the house we started preparing for the Easter Bunny, which included colouring eggs.

Saturday morning we all headed into Calgary to the Inglewood Bird Sanctuary, where I was really hoping my nieces would be able to experience something special for the first time, hand-feeding Chickadees! And the whole family got to experience the special joy of hand-feeding these cute little birds.
Easter was a fun filled day spent at the house with egg hunting, Wii bowling, movies and lots of great food.

Rob flew back to Toronto early Monday morning, while I had one more day of visiting before heading to Las Vegas for a couple days. It was another great Easter!

PS: Rob was thrilled to finally see a Magpie!