If my 47 year old self had of been able to go back in time to talk to my teenage rocker self and told her that the day would come that I would enjoy and appreciate "down home" fiddle music, I probably wouldn't of believed her. Turns out, I would of been telling my younger self the truth.

I saw an ad for an "East Coast Kitchen Party" taking place on Sunday, October 2nd at St. Jame's Gate, an Irish Pub not far from our home. Now, anyone who knows me, knows I do not go out on a work night, hell, I rarely go out at all anymore, but going out on a Sunday night is just unheard of in my world. Still, I couldn't get the outing out of my mind, and knowing Rob had no interest, I reached out to my girlfriends to see if anyone wanted to go with me. Lots of interest, but the date was only good for one other, a fellow "Bluenoser" . 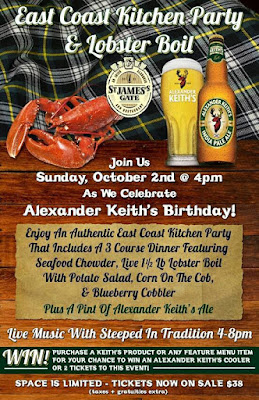 The party was fabulous! The music of Sandy MacIntyre and Steeped in Tradition had our toes a tapping and hands clapping. My Mother would of been proud. I have never sang "Farewell to Nova Scotia" so loud.,

Andi and I had a grand time! We both look forward to attending next year, but we're going to book the next day off work, as neither of us wanted to leave the party, it's a Maritimer thing.