In January, January 26th to be exact, I was knocked down with the worst flu of my life. Unfortunately that was just the beginning of the health woes that seemed to follow us as the year went on.

March 21st I fell on the stairs at home and broke my right foot. I was off work for a month and spent my two week May vacation hobbling around in a boot-cast. July 21st Rob fell off the roof at home while cleaning the eavestroughs. He was taken to the hospital by ambulance. Two broken ribs and off work for 6 weeks. August 4th was the last time Rob's feathered Pigeon buddy, Pierre, visited the backyard. He had been a staple in our backyard for 5 years. August 12th we woke to discover that Misfit, our budgie of almost 10 years had passed during the night. September 18th I was diagnosed with Shingles. December 1st I had a horrible case of food poisoning. *Sigh* See why I am looking forward to the end of this year? I do realize that a lot of these things could of been a lot worse, especially Rob's fall. I am grateful that all the health woes we went through weren't worse.

It wasn't all bad though, there were some good times through-out the year. Like discovering my friend, Andi, was actually my cousin! I had a great getaway weekend with a friend in September, and Rob and I had a great week off in October and again in November. The best event of the year happened over the Christmas holidays though.

On Dec. 22nd, my father flew to Toronto from Nova Scotia. The next day, he, Rob and I all flew to Calgary from Toronto to spend 3 nights with my brother and his family. It was a very special and memorable Christmas. The year definitely ended on a high note.

To everyone reading this, I wish you all a happy and healthy 2018! Make some great memories!
Posted by Angie in T.O. at 5:58 PM 1 comment:

I tried a new recipe today. I had seen Tenderflake's "Holiday Crackle" making the rounds on social media the last couple weeks, and decided to give it a try. I wanted to take something for the department's Christmas lunch tomorrow, and this looked like a good recipe to try.

It's a pretty easy recipe, and makes about 24 good size pieces. It got 2 thumbs up from Rob.


I've always loved this time of year, and even as a little girl I enjoyed all the extra mail that came to the house in the form of "Christmas cards". My Mom taped them up around the house, and I have always felt that they were part of our Christmas decorations.

It was only natural to me that when I moved away from home I would carry on this yearly tradition. I've been told my card is usually one of the first ones received, that's because I always aim to have them ready to mail by December 1st. I enjoy sending them, and I love receiving them.

The last few years we've started getting one of Rob's photos made into a Christmas card, but I never seem to order enough. The mailing list made up of family, friends and even a couple social media acquaintances has grown close to 70! We receive cards from as far away as Scotland and England.

I had a friend tell me once that the Christmas card exchange was a dying tradition, not if I can help it!

Every time I walk into the kitchen this time of year it's like receiving a greeting from friends and family.

Want to exchange Xmas cards? Send me your address! Merry Christmas everyone!

Here is a link to a blog from 2013, about finding a very special Christmas card.
Posted by Angie in T.O. at 7:04 AM No comments:

On Thursday, November 30th, Rob and I celebrated the 5th anniversary of our marriage. The original plan had been to go to Niagara Falls for the night. But for a couple different reasons that plan fell through, and we were left scrambling for what to do to mark our special day.

We decided to keep it simple and enjoyable, much like our marriage day. You can read all about that by clicking here.

What do two bird-nerds do to celebrate their day, they go birding of course! We started the day with brunch at Cora's and then spent a lovely morning and some of the afternoon birding. We later enjoyed a delicious dinner at La Castile, where we've been going for our anniversary these last 5 years. It might not of been our original plan for the day, but it turned out to be a great day anyway.

A few of the birds we saw during our outing;

Actually, that picture is from last year's anniversary, I forgot to take one this year! Oops!
Five years down, a lifetime to go......
Posted by Angie in T.O. at 4:34 AM No comments:

One of the nice things about having a stay-cation is the opportunity to take in things during the week when it's less busy. On Tuesday, November 28th, Rob and I did just that by heading down to the Toronto Distillery District to take in the Toronto Christmas Market. It was our first time going.

We had a grand time! We walked around and checked out all the vendors, made a few purchases.We enjoyed the sounds of the "Candy Cane Carolers", and had a delicious early dinner at Pure Spirits Oyster House and Grill. After dinner we enjoyed a hot chocolate from Soma while enjoying all the Xmas lights after the sun had set. Definitely an event I will partake in again.


Ok, so one of the things you notice really soon at the market, is that it is "selfie central". There are so many great places to take pictures, it's hard not to get wrapped up in it. We did get wrapped up in it! Neither one of us have a good camera on our cell phones, but we took a bunch of selfies anyway. 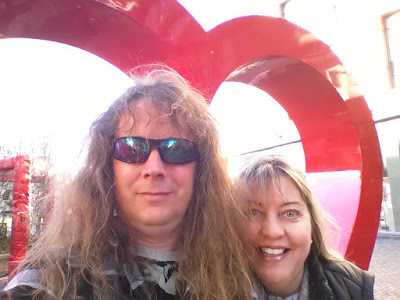 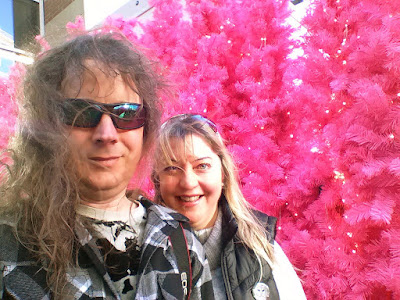 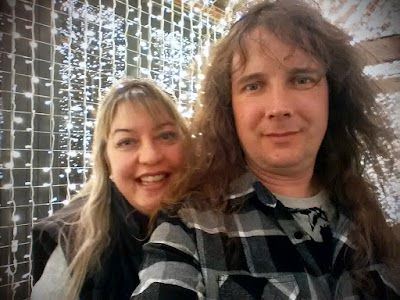 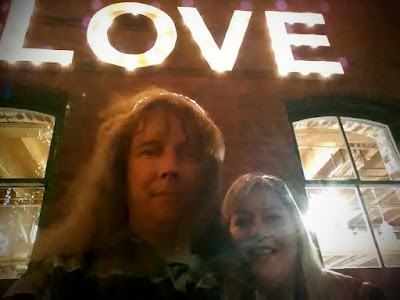 THE DONKEY SANCTUARY OF CANADA

Rob and I were on vacation last week, and we finally made a trip to one of the places I've been wanting to visit since hearing about it a few years ago.

The Donkey Sanctuary of Canada is a registered charity that provides homes for Donkeys and Mules, that for various reasons find themselves in need of a home. I'm still learning about the organization myself, and suggest visiting their website for detailed information.

They are home to close to a 100 Donkeys, and we visited during  one of their special "Christmas Days" openings. It was cold and windy that day, and I honestly didn't think many people would be there. Boy, was I wrong! The parking lot was over flowing, and the Donkeys had lots of people visiting them.

I knew before we visited that we would sponsor a donkey while there. I also knew that we'd "know" the donkey we should sponsor when we saw him or her. I was right, we did know when it happened, and it turned out not to be a donkey at all, but a lovely mule named "Petunia".

We really enjoyed ourselves despite the cold and windy weather. If you haven't made a trip to visit this place, I highly suggest you do. It's good for the spirit to hang out with the donkeys, and we look forward to many return visits!


**Do you have a hard to buy for animal lover on your Xmas list? Why not sponsor a donkey in their name! And in the Spring they can go visit their donkey!**

Back in November we heard about an event taking place not far from our place. You could register with "Tree for Me" to get a free native species to plant in your own backyard. They offer a variety of trees, you could take up to 2 , and they even gave a short lecture on how to care for the tree of your choice.

We went online to register and pick our tree. The Service Berry Tree caught both our interests immediately, knowing that it produces berries for birds and wildlife. On November 18th we went to get our tree. I named her "Sally" on the drive home.

She won't produce berries next year, but the year after she should start. She's a hardy native tree that should do well in our backyard. Depending on how she does, we may get another for a different area of the backyard.

Below is a picture Rob took last June of a Cedar Waxwing in a Service Berry Tree at a park not far from our home.