On the night of Friday, August 11th, I put the budgies to bed as per normal. I didn't know that it was going to be my last night doing that ritual with Misfit. When we went to get them up in the morning, Misfit was at the bottom of her cage, she had passed sometime during the night.

I can't say we were shocked, but saddened and surprised. Misfit had been looking a little rougher the last year, but she still played, ate, tweeted and molted twice a year. We think her passing was age related. She was probably 3 or 4 years of age when Rob rescued her and next month would of marked 10 years of her living in the house, so she was probably around 14 years old.

We spent the day feeling gutted and sad. Seriously, I felt like someone had punched me in the stomach. But we also had a lot of laughs too, reminiscing about our life with Misfit. We had some adventures with that bird. Rob did a fantastic blog about Misfit's rescue and life with us, you can read about that by clicking here.

The last two weeks have been an adjustment, the house has felt a little emptier. She was a little bird with a big personality. I miss singing with her in the kitchen and putting her to bed at night. I always said the same thing to her every night after I covered her cage. "There you go Misfit, snug as a bug."  She loved Frankie Valli and the Four Seasons, and her favorite Christmas song was "Step into Christmas" by Elton John. She loved being outside in her cage to enjoy a nice summer day, tweeting along with the backyard birds. In the winter she loved the warmth of the kitchen with the oven on while I baked and cooked. We'd sing along to the oldies together. I will miss those moments.

As sad as I was, I was also very worried about our other budgie, Moonie. Moonie, like me, had never lived in the house without Misfit. We caught him five years after having Misfit, again in our backyard. He was just young when we caught him, probably not even a year old. They weren't a "pair", and didn't share a cage, but we still worried Moonie would become depressed. Their cages were side by side, and we did let them visit and play together often, they were "friends". It's now been two weeks, and I am happy to say Moonie seems to be doing fine.

We buried Misfit in the backyard last Friday. I wrapped her in a piece of cloth I cut from her night time cover, and placed her in a small blue cardboard box, the same color as Moonie. Her final resting spot faces the big tree she slept in every night that summer in 2007 before Rob caught her and brought her inside. She was a character, a part of our pet family and a huge part of our home. She will be missed.

Ever since Molly was a wee little kitty she has had a love for round, ring shaped things. They quickly became her favorite play toy.

It all started with a masking tape roll. 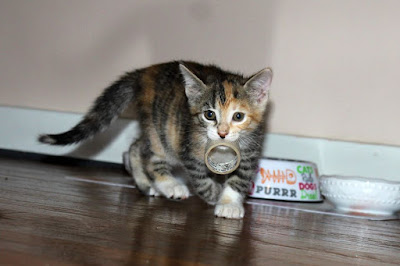 As she got a little older, it became the plastic ring on the Planter's Peanut bottle. 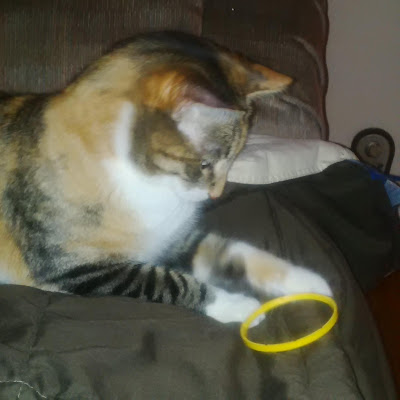 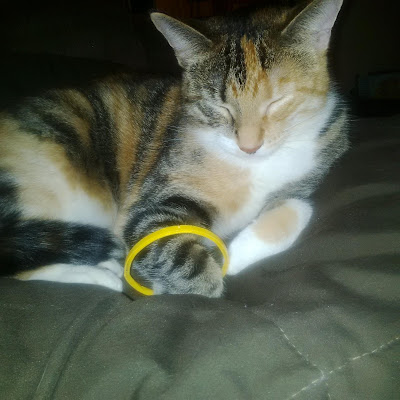 Oh, we tried buying some round shaped cat toys, but no, these kinds of round objects seem to be her preferred items to play with. Her newest obsession is the round ring off of the Gatorade bottle. 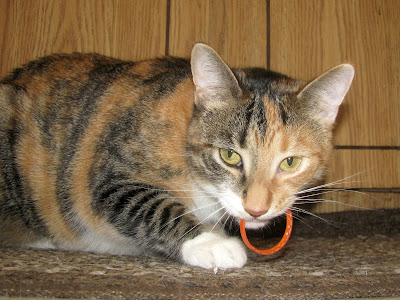 Molly and Gollum may have had one thing in common, but Molly wins the cute factor hands down. 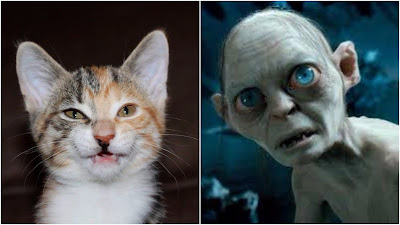 Everyone talks about how life can change in a moment, and we all go through those life changing events. But then after awhile, we kinda just go back to living life the way did before, taking it for granted, stressing about stuff that really isn't important, and worrying about things we can't control. But then something happens again that rocks us, and makes us value life and those we love.

If you follow my husband's blog "Rob and the Animals", you already know what happened on July 21st. This is my side of his story.

About 11:30am my desk phone at work rang. I knew it was Rob because of call display. There was a co-worker in my office talking to a contractor, so I couldn't hear Rob well. He sounded funny, mumbled, but my brain finally caught three words; "roof"', "fell" and "hurt". I told him to hang up and call 911, and have them call me when they knew what hospital they were taking him to.

After I hung up, I was regretting it. Why didn't I call 911 on my cell, and keep him on the phone? After thoughts. It's kind of a blur, I was panicked and trying not to be. I had the front desk call me a cab. In the cab I tried Rob's cell, and he managed to answer. The ambulance attendants had arrived. They weren't sure what hospital yet. We decided I would just head home, and check on the animals, and go to the hospital after.

My next call from the cab, the LONGEST cab ride ever, was to his Mom. No answer, and no voicemail, so I sent her a text to call me as soon as she got the text. About ten minutes later, I'm still in the cab, she called. My first words were "Now don't panic..."

I arrive home, and still don't know what hospital he was at. It was easy to tell something had happened. He had got sick by the back door, and the kitchen floor was covered in dirt. The cats were completely freaked out. Now, I had been worrying about them as well. I didn't know if Rob had them outside in their kittywalk, or if they had made a run for it when the ambulance people opened the front door. I was happy to see they were both in the house, though scared.

I got a text about 5 minutes after arriving home. He was at St Joseph's Health Centre. I called his Mom, and she left to pick me up. While I was waiting for her I cleaned up the kitchen and took care of the cats and the budgies.

We arrived at the hospital about 1pm. His Mom dropped me off at the entrance, and I quickly found him. I remember being surprised at how full the emergency room was. He hadn't been looked at yet.

I learned a long time ago that it's better to remain calm and be polite when in these situations. You know that scene in "Terms of Endearment"?  It became my motto and a joke with his Mom for the next 8 hours, don't pull a "Shirley". I made "friends" with the person working at the info desk, and through-out the day he was helpful, letting me know wait times, directions to the cafeteria and even getting me a a pair of ear-plugs for Rob.

It was hard seeing Rob in so much pain, and there was nothing I could do to help him. I just told him to try and rest, and stay still. He was finally seen by a doctor around 2pm, and then sent for X-rays. He was given pain medication. He had to go for x-rays a second time. Seen by the doctor again, and then he had to go for a cat scan. All this happened over a few hours.

At one point, a female, blonde ambulance attendant walked by us, and she asked Rob how he was. He managed a smile for her. Yup, pain meds had kicked in. Her and her partner, who was also female and blonde, had brought Rob in. They were very nice and even let me take a picture of them, which I promised I wouldn't share on social media. Turns out I wasn't the only one worried about the cats, it was his main concern when they arrived to the house to see to him, so they told me. I teased him about having two, female blondes take him on his first ambulance ride. Go figure.

While Rob slept, his Mom and I couldn't help but notice some of the other patients. The lady beside Rob was gagging a lot and being sick, hence me getting him the ear plugs. We were happy when she was discharged. There was also a guy who didn't like to stay in his bed and kept walking around with his backside hanging out. But the most exciting character showed up around 7pm.

He was brought in by ambulance. I could see him from where I was sitting. The whole energy in the room changed for me. I knew immediately this guy was trouble. I kept my eye on him, as did the ambulance attendants. I made eye contact with one of the ambulance attendants a few times. He knew I was watching this guy. The patient was in his late 20's, early 30's. Big muscle guy, it wasn't obvious what was wrong with him, but you could tell he was in pain. He got off  the stretcher, and found a chair. Now he's quite close to Rob. I can see him, but Rob's Mom can't, because the curtain was between them, but she knew I was watching someone, and she knew I was worried.

All hell broke loose when a nurse went over to ask him how he was. In seconds he was screaming and throwing chairs. I covered Rob with my body and his Mom ran for cover. Code something was called and there were security guards everywhere. He was taken to another room with guards. Rob did wake up during all this excitement.

When the doctor came back just after 8pm with the good news that there was no lung damage, I let out a breath I wasn't even aware I was holding. Final diagnosis, 2 broken ribs, the 6th and 8th. It could of been so much worse, he was lucky. Rest for a few weeks and pain medication was prescribed. We got home around 9pm, he was finally able to, and wanted to have something to eat.

He's been home for two weeks now, and will be for at least another two, he's needing pain medication less, but there is still lots he can't do. I know from being home with a broken foot for a month, that the boredom can become the biggest ailment.


I've had to take over some of Rob's chores; getting the budgies up in the morning, they didn't take kindly to the new sleep schedule at first but they have adjusted. Taking out the trash and mowing the lawn. I pick up a few groceries almost daily. We have lots of offers of help from friends and family and we are both very appreciative and have asked for help when needed.

I didn't sleep good the week after this happened. Nightmares of what could of happened kept me from sleeping well.  I'm happy to say we are both doing better this week.