Ten words I think my friends would use to describe me: 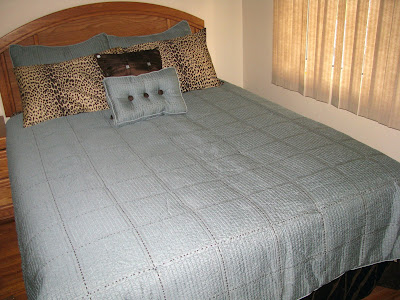 I like to change the bedding seasonally. I usually have a set for spring/summer and a set for fall/winter, plus extra sheets. The set I had for spring/summer was looking a little worn, and it was kind of "girly" so I decided to replace it this year. Since I'm living with Rob now, I wanted to get a set we'd both like. We found a great high quality set a couple months ago at 50% off that came complete with shams, bed skirt, sheets, comforter and 2 decorative pillows. We finally got around to putting it on the bed this week. We both like the color combination of the brown and blue, and the leopard print sheets that came with it were something we both really liked too. 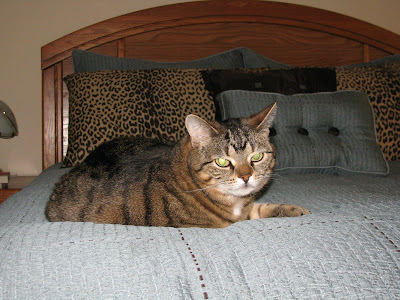 Ten movies I feel were underrated:

1. The Upside of Anger - I still think about this movie.
2. Little Black Book - I love "make you think" movies.
3. Chocolat - Charming, and I was craving chocolate when I left the theatre.
4. Now and Then - Great Cast, great story of friendship.
5. The First Wives Club - Same comments as above.
6. Almost Famous - There's a real story about love and friendship in there.
7. Rockstar - It's really about finding out what's really important.
8. The Birdcage - I LOVE this movie, so funny and heart warming.
9. Radio - See this movie, it's a "feel good" kinda movie.
10. Dr. Dolittle - If only....
Posted by Angie in T.O. at 7:36 AM 4 comments:

Describe to me your favorite lounging clothes.
Baggy pajama bottoms and a tank top.

If you promised to never lie again in your lifetime, in what area would it be hardest to uphold the promise?
Saying yes to seeing people I really could care less if I saw.

One of the things I love about where we live is how close we are to Bloor West Village, and it's many markets, unique shops and some great restaurants. This morning we were meeting friends for brunch at my favorite restaurant in the village, "Dr. Generosity".

As part of my "boot camp", I have exercise homework, and today I needed to do a 40 minute walk, so I decided to walk to the restaurant to make sure I got my walk in. I knew we were going to walk around the area after brunch, but I wanted to do a good steady power walk. It took me about 50 minutes to walk from the house to the restuarant.

I walk home quite often from the subway during the week, but today I decided to walk a different route, to check it out.

I discovered some cool new shops that I wanna go back and check out when they are open and I have more time. "Repeat Boutique" is a second hand designer woman's clothing store benefiting the charity "New Directions for Women" and "Windergarden" is a decorative garden store with indoor and outdoor accents. Looking through the window it reminded me of a store you'd find in the Muskoka region. I also finally got to peak in a window I've driven passed many times called "Angel & Mermaids", lots of sparkly jewelery in there! I'm really glad I decided to take a different route today!

We had a great brunch and then enjoyed picking up few things at the various markets in the village before heading home.
Posted by Angie in T.O. at 1:33 PM 4 comments:

Actually, looking at this list, I don't think "getting older" is a bad thing!
Posted by Angie in T.O. at 5:58 AM 4 comments: 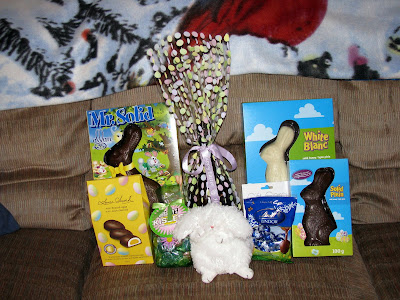 We had a wonderful Easter weekend full of family, friends and nature.

My long weekend fun started right after work on Thursday when I met a friend, Jenn, for a coffee. After coffee, I walked over to have a visit with another friend, Amanda and her little boy, Finn. Next I was off to Hernando's Hideaway to meet yet another girlfriend, Darlene, for some Mexican food before seeing a movie together. We went to see "I Love You Man". It was ok, had some laughs.

Friday morning and afternoon were pretty lazy, just relaxing at home. Rob wasn't feeling the greatest. Later in the afternoon we went over to his best friends place, Chris's for fish and chips and lots of other goodies. This is the fourth year in a row we've gone there on Good Friday, it's a tradition now. Their like family to us, and we always have a great time with Chris and his extended family.

Saturday morning we were at Loblaws at 8AM to get groceries over with for the week. I went in my pajama bottoms and flip flops thinking it would be quiet at that time of the morning, wrong! It was very busy, guess a lot of other people had the same idea. Later that afternoon we went over to Rob's parents for an early Easter dinner with some of his family. His Mom made a roast turkey with all the fixins, it was really good.

Sunday morning after checking out the Easter goodies the Easter Bunny left we went to Cora's for brunch and then to Riverwood Park to check it out for the first time and see if the birding was any good. It was! We both had a chick-a-dee land in our hand for some seed, and we saw lots of different birds. We will be going back there in the near future hoping to see some of the migratory birds that don't make stops in the city.

After returning home we tried to have a quick nap, but Meadow (our cat) didn't like that idea and kept jumping on us, we got up and went out in the yard. I had a ham in the slow cooker, and made scalloped potatoes and steamed some peas to go with it.

After dinner Amanda and Lisa stopped by to pick up some books and we had a quick visit. After they left I had a bath and got ready for bed. Rob and I watched some TV together before heading to bed. It was such a nice long weekend I was sorry o see it come to an end.
Posted by Angie in T.O. at 6:27 AM 2 comments: 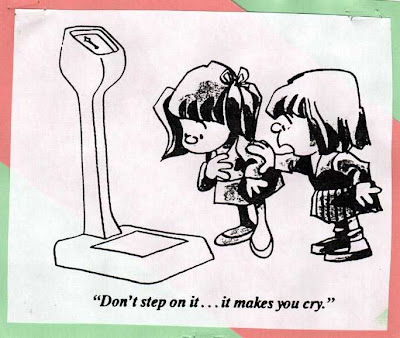 I haven't posted much this week because I've been cheating. I started another blog. It's called Angie's Weigh, and it's to help support me in my quest to lose the extra weight that's been weighing me down and stealing my energy. I hope you check it out and follow me there, the support is greatly appreciated.

This may be a hard one for me, I love food and trying new things!

1. Eggplant
2. Black licorice
3. Canned peas and most canned veggies (canned corn and beets are ok)
4. I don't enjoy "hot spicy" foods.
5. Lychee nuts
6. As much as I try, I cannot get myself to like oatmeal.
7. Raw oysters (but I love them smoked!)
8. lentils
9. Bread Pudding (Bread shouldn't even be in the name of a dessert!)
10.Canned cream corn. YUCK!

Another year has come and gone, but the memories of another fabulous weekend away at the Briars resort with my girlfriends will last forever. 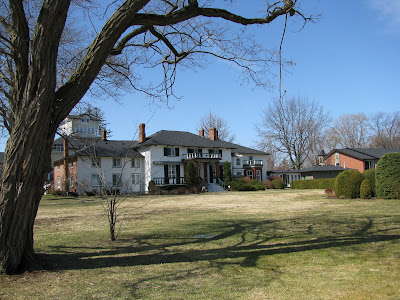 Jenn and I waiting for our spa treatments. 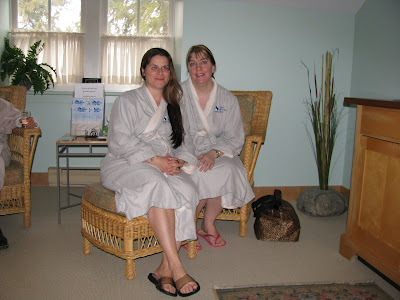 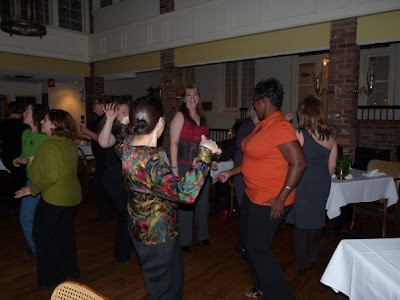 The dancing and fun continue back at our cottage in our PJ's! 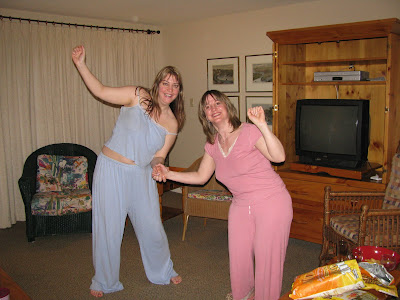 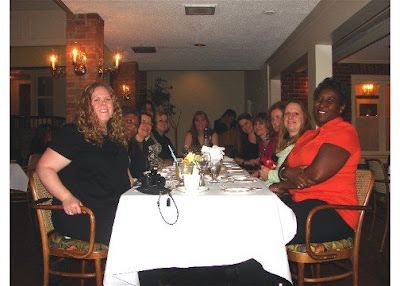 We had such a good time, we decided not to wait until next April, but are going up for one night in June to celebrate my 40th Birthday! Wanna come?
Posted by Angie in T.O. at 7:51 PM 1 comment: 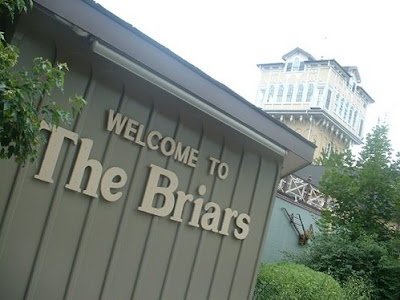 This morning I'm up bright and early again, but I'm not getting ready for work, I'm getting ready to attend "The 8th Annual Girls Getaway Weekend" at the Briars Resort.

I have been organizing this event for 8 years. I started doing it when I publicly ran a woman's social club here in Toronto, but for the past 3 years, it's just been for my girlfriends and their friends, and it's much more fun. We've had anywhere from 10 - 24 women attend. We call ourselves the "Girls' Night Out Club", and I still organize monthly events, but this weekend is the highlight of the year.

It's a weekend of fine wine, gourmet food, pampering in the spa, relaxation and the company of girlfriends. I can't tell you how much I look forward too and enjoy this weekend every year, and the staff up at the Briars look forward to our group coming.

If you don't do something like this with your girlfriends on a annual basis, I highly suggest you start, it's good for the spirit.
Posted by Angie in T.O. at 6:57 AM 3 comments: