It's been an extremely busy couple weeks for me and I haven't had time to do a blog lately, but I urge you all to read this one. Both Rob and I volunteer for a few different animal/wildlife/bird organizations, and it is so rewarding, we definitely get back more than we give.

My birthday was this past Monday, and both Rob and I took it off work to make it a long weekend, and the weekend part of my birthday was awesome, my actual birthday, well, we'll get to that.

My birthday celebrations started Friday when I got home from work and found a lovely orchid and card waiting for me from our friend, Patty. She had given it to Rob that morning for me. That nice surprise was followed by dinner with a few girlfriends at Dr. Generosity in Bloor West Village.

Saturday evening Rob and I were invited to our friends, Dave and Andi's for dinner. Andi's birthday is just two days before mine, so it was fun to celebrate together.

Andi is from Nova Scotia too. We enjoyed lobster and our fussy hubbies had chicken.

Rob and I went to Niagara Falls for the day on Sunday. I really wanted to visit the Butterfly Conservatory and have lunch at Margaritaville, which is exactly what we did.

Before we headed back home, we decided to stop into the Fallsview Casino Resort and check out the casino. We each decided to drop $20 in the slots. I ended up winning $350!! Woo hoo!!!

My actual birthday, Monday, was a rainy, dreary day, maybe that was a hint of what was to come.
It started off nice enough, I woke up to cards and presents and opened them while I had my morning coffee.

Things went downhill quickly after this. The weather gave me a migraine, and I ended up going back to bed. Around lunch time I got up and got ready to go lunch with Rob. I felt bad about being in bed ill, while he had taken the day off to spend with me.

What happens next can only be described as a comedy of errors, though none of it amused me at the time.

Not feeling the greatest anyway, I suggest just getting my cake and going home. We go to the bakery. They have no record of my order. I feel utterly defeated. I had placed the order and paid for it the same time I did mine and Andi's cake. I had asked them to write "Happy Birthday Mrs. Robert Mueller" as a surprise to Rob, as it was my first birthday married. I had to leave the bakery as my eyes filled with tears. They gave us another cake and some free goodies as they felt so bad about the error. We went home and I went back to bed for another hour.

Rob, the trooper, went out and picked us up some Chinese Food and tried to make me laugh, which was tough at this point.  I guess in the big scheme of things, all these little things aren't a big deal, I know that. I had a great birthday weekend, and I got to spend my birthday with my sweetie. And he's promised to take me for High Tea before the end of the month.

STOP AND SMELL THE FLOWERS

Even our cat, Meadow, takes time to stop and smell the flowers. This is her favorite backyard flowering bush, and yesterday she got her first sniff of it this season. By the look on her face in the following picture, I'd say she was very happy about it. 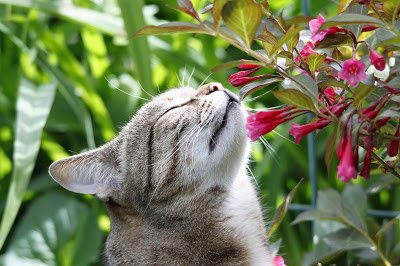 Footnote: Meadow only goes out in our backyard on a leash and harness. She is always supervised and I am happy to report has never killed a bird.
Posted by Angie in T.O. at 6:20 AM 1 comment: