Last Saturday, Rob and I went on a little road trip. We headed over Niagara way to the Winona Peach Festival. I've been wanting to go for years, as I enjoy these small town festivals. We spent the morning there; roamed the arts and crafts booths, played some bingo, shopped in the vendor area, looked at the antique cars, watched some entertainment on the main stage, and of course ate lots of peachy goodness!
We ended our festival visit after lunch with a Peach Sundae for dessert, I think this booth had the longest line, they were delicious.

We made a detour on our way home to stop into a butterfly garden I had recently learned about. This small but lovely park is named The Urquhart Butterfly Garden after Frank Urquhart, who started the Monarch Butterfly Migration monitoring program in the 1970's. The garden is pesticide free and is home to many different native plants that the butterflies love.

We spent an hour there before heading home and saw many Cabbage Whites, a couple Monarchs, a couple Pearl Crescents and a few Orange Sulphurs. I look forward to a return visit.

It was a great summer road trip!
Posted by Angie in T.O. at 7:59 PM No comments:

I've been a Kenny Chesney fan for many years, but finally saw him live for the first time a week ago Thursday night. Buying a ticket was a spur of the moment decision and I decided to do the VIP package for the show. Lady Luck was with me and I ended up with a front row centre seat.

The VIP party started early, and I met some very nice people to hang out with until the concert started. I'd only ever done VIP for Def Leppard before, but I gotta admit, the food and the merchandise for Kenny's VIP package was scales above the Leps.

Shortly after arriving in the VIP area and picking up my merchandise I grabbed a table to sit and have a few drinks and some dinner. Good music was playing and it was a nice pre-concert  atmosphere. I was joined by a really nice couple from Barrie, that also had Maritime roots, and later in the afternoon we were joined by Marie and Eva, who were a blast to hang out with.

Time for the concert! I gotta say, after listening to Kenny almost daily for the 3 months leading up to the concert, and being a fan for years, he kinda took my breath away when he hit the stage. I couldn't really believe I was going to be able to sing along with him live, and not just in my kitchen!

It was an awesome concert, no fancy light show or pyrotechnics, he doesn't need them, he's a energy ball all on his own. I like that his songs range from that classic country feel, to rock, to music that makes you feel like you're sitting on beach somewhere warm. I'm so glad I went!

I don't take a lot of pics at concerts, as I want to enjoy the show, I had my camera out for 2 songs and then packed it away. I have no pics of him looking at me, because when Kenny was singing to me, I didn't want to be rude and put a camera in his face, as I was that close. Here are a few I took. 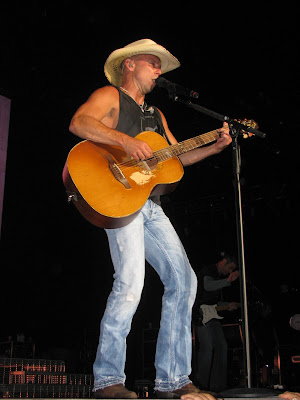 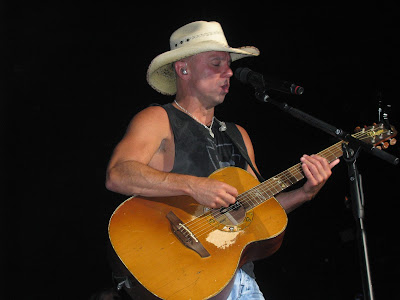 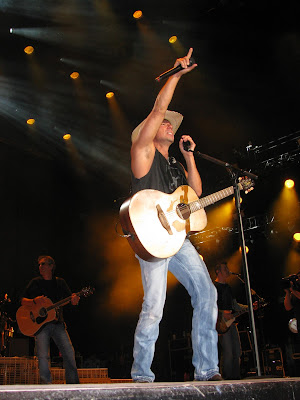 I can't do a blog about Kenny and not talk about his rum! When I found out this spring that he has a new rum out called Blue Chair Bay, I had to try it. It's only available in the USA, but lucky for me, a summer student at work was back and forth to Buffalo and was able to grab me a few bottles of the coconut flavour and friends also brought me back a bottle of the coconut spiced. I cannot stress how good this rum is, Rob and I are both huge fans and look forward to the day it's available here in Canada. Blue Chair Bay Coconut Rum has definitely been our drink of choice this summer.

I also need to mention Kenny's online radio station, No Shoes Radio. I love this station and it is now my station of choice while at work and home. Where else could I hear AC/DC, Def Lep, Tesla and George Jones all on the same radio station!! They also play lots of Kenny and music with some "island flavour". You never know what you're going to hear, but it's a great mix!

Kenny, thank you for the music, the radio and the rum!!

This past March marked 24 years of living in Toronto for me. I've made a good life for myself here; great friends, a good job and a wonderful husband. Toronto is home to me now, though I'll always be a proud Maritimer.

One of the things I miss from Nova Scotia besides family and friends is the fresh seafood, especially in the summer. This past Saturday I was able to satisfy my need for some good seafood with a big feed of lobster and a backyard full of friends.

Saturday marked 2 years since Moonie entered our lives and our home. I spotted him outside roaming around our garden shortly before Rob had to leave for work that day. It wasn't long after that the little blue bird entered our hearts as well as our lives. To read the full story of that day, click here.

Footnote: When we first got Moonie, we weren't sure of the sex because he was so young. His cere turned blue and we assumed that he was a boy, as they are brown on females. It's since turned brown and Rob thinks it changes colours when they molt. So, until Moonie lays an egg he's a boy in our eyes.
Posted by Angie in T.O. at 8:15 PM No comments:


No, not our baby, gee-sh, at 44 years of age, that ship has sailed! Our good friends, Brian and Amanda, are expecting their third child in November and last night we gave them a baby gift.

I had my friend and distant cousin in Nova Scotia crochet an owl baby blanket for me. We emailed back and fourth to discuss colours, etc., she sent me photos from time to time, and I emailed her payment. It was super easy to arrange, and Amanda was thrilled with the gift. She even sent two owl hats because she had extra material left over at no extra charge!

She does great work and I would highly recommend her if your looking for some beautiful, home-made, crocheted gifts. Contact me if you would like more information and I will put you in touch with her.

Can't wait to see the new "little one" wrapped up in the blanket and looking precious in the hats.
Thank you Amanda for allowing Rob and I to force our "Owl Love" on your children. *wink*
Posted by Angie in T.O. at 5:14 PM No comments:

We hadn't been to Rosetta McClain Gardens since Big Frank's passing and with the 10th Anniversary of his "Hawk Watch" there, it was important to me to be there for a sunrise. I wanted to view a sight that he had witnessed so many mornings.

So, on the holiday Monday, Rob and I were out of bed at 4am on the road by 5am. It was a difficult walk to the fence, I had never walked there without Big Frank being at the other end to greet me. Instead we were greeted by the sound of a "choir of Cardinals" singing, it was blissful. The sun rose right on time and it was spectacular!

Walter joined us a couple hours later and we spent a lovely morning enjoying the park. I didn't see any hawks, but had a grand time chasing butterflies, watching the bunnies and looking at song birds.

We don't get to Rosetta Gardens often, but we always enjoy the time we spend there, and I know we can always find Big Frank's spirit there.

This past Sunday Rob and I made our second annual trip to Kempenfest with our friends Dave and Andi, who have been going every year for more then a decade. The weather was good for roaming all the vendor booths and I came home with lots of goodies; bath stuff, foodie stuff, a few gifts, but without a doubt my favorite purchase of the day was my new "fairy door"! (pic below)

On our way home, after stopping at A & W ( a new tradition!) for a bite, we stopped beside some huge fields of sunflowers we had passed on the way there. Sunflowers remind me of my Mom, and I had never seen so many at one time before, it was beautiful.
Posted by Angie in T.O. at 4:55 PM No comments:

Last Saturday night we took Rob's Mom to see Whitesnake at Casino Rama. This isn't the first time we've all gone to a rock concert together, we all went to see Joan Jett there a couple years back. Jane, (Rob's Mom) is a long time rock 'n 'roll fan and has seen bands like Led Zeppelin and AC/DC (with Bon Scott) in concert. She's trying to get out to more shows lately, as there are still quite a few bands she wants to see live for the first time, like Whitesnake.

We had pretty decent seats for the show, but not floors and I only had the power shot camera with me, so no great photos. Fortunately. a rock and roll acquaintance, James O'Connell, saw Whitesnake the night before the Rama show in London and has allowed me to share a few of the awesome photos he captured. Please enjoy a few of Jame's pics: