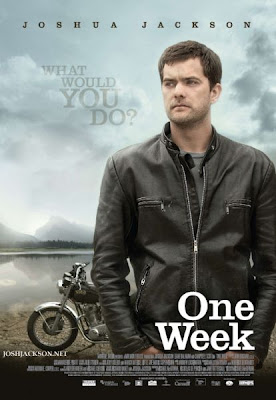 I have wanted to see the movie "One Week" starring Joshua Jackson since I first started seeing trailers for it. I didn't make it to the theatre to see it when it came out, but finally got around to renting it last night.

I don't think you have to be Canadian to enjoy this movie, but I have to admit, I LOVED that the whole movie takes place in Canada. I loved the Tim Horton's coffee cups, the newfies and all the beautiful Canadian scenery.

The movie has a pretty serious storyline, and a great message. It's about a guy who's probably in his early 30's who gets diagnosed with late stage cancer and how he deals with that. It's not all doom and gloom and is very heartwarming and enjoyable to watch.

With it being a holiday here tomorrow, Canada Day, and the weather not suppose to be the greatest, I highly recommend picking up this movie to watch, it will make you proud to be a Canadian.

Remember, it's not about when you die, it's how you live!

BUNTING AT THE BADLANDS 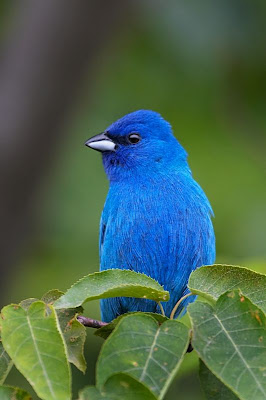 This past Friday, Rob and I didn't want to do too much, but we didn't want to stay home all day either. So, we decided to take a drive out to a beautiful little village called Belfountain, and also stop into the "Badlands" on the way there.

The Badlands is an area that at one time was covered in water and is just cool to see, check out the photos below.

We hadn't really thought about viewing birds while we were there, but that all changed not long after we got there. Rob spotted a male Indigo Bunting in a tree! (pictured above) It was my first time seeing one, and I got to watch him for quite a while before he flew off. What a beautiful little guy!

After our stop at the Badlands, we drove into Belfountain and stopped for an ice cream cone, and headed back home. We also stopped into the Apple Factory on the way back and picked up some local fresh strawberries, local asparagus, apple cinnamon mini cakes, and a fresh baked strawberry/rhubarb pie, it was still warm!

It was a great little outing, and we finished the day by having a BBQ at home. Below are a few pics from the day, click on them to enlarge them. 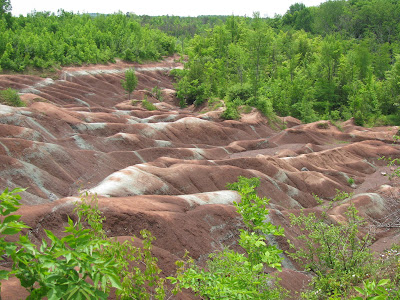 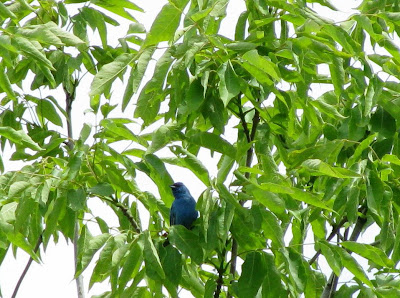 Rob took this picture of the male Indigo Bunting we saw. 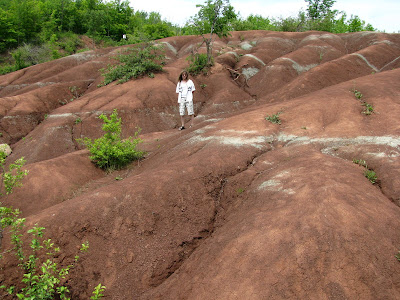 Rob in the middle of the Badlands. 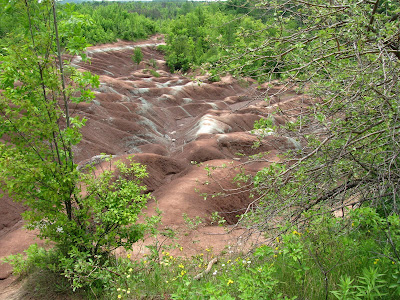 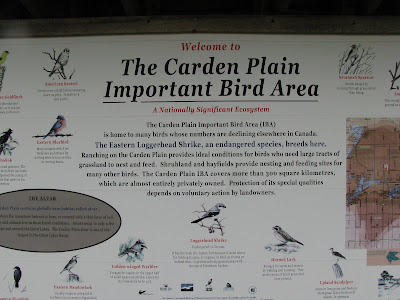 Another big birding outing yesterday. This time it was to an important birding area called "Carden Plain", it's about 2 hours north of Toronto and located between Kirkfield and Orillia. Over 200 species of birds migrate and breed here, some of them endangered species, and the land is now protected.

We were very excited to visit this important area, and were not disappointed with the sightings we had. We saw many birds for the first time and I know going to this area will be a yearly occurrence, if not more. The sights were breath taking.

I've posted some pictures below of a few of the birds that stood out for me, some of them I've borrowed from Google Images, so you can get a better look at what I saw, and some of them Rob was able to get a pretty good shot of, so I used some of his too. 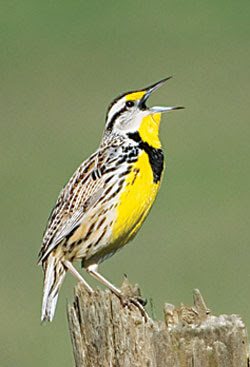 The Eastern Meadowlark was one of the two birds I was really hoping to see on this trip, and it was actually the first bird we saw upon entering the area. We saw quite a few singing from the tops of trees.

Rob snapped this shot of one of the many Yellow Warblers we saw in the area.

Rob was able to capture a pair of Eastern Bluebirds in one shot. We saw many, much to our delight. 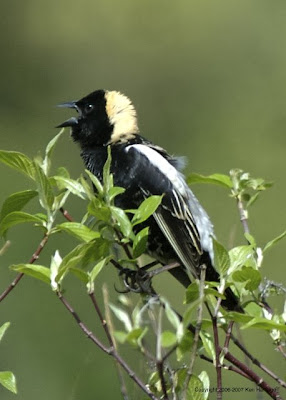 We were pleased to have many sightings of this unique and beautiful bird, the Bobolink. 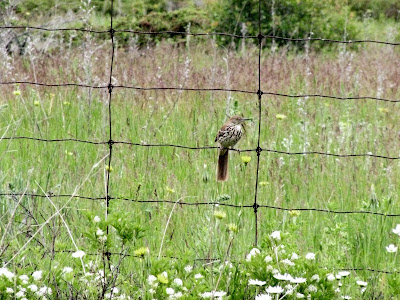 This was our first time seeing a Brown Thrasher, and we saw quite a few flying around. Rob took this picture of one. 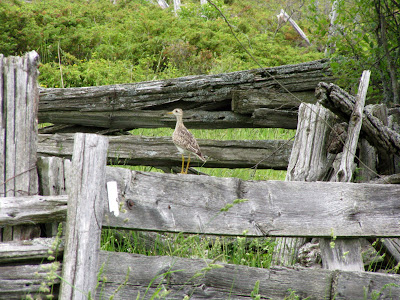 Another first, an Upland Sandpiper, they looked so outta place sitting on fences and trees. Another shot of Rob's. 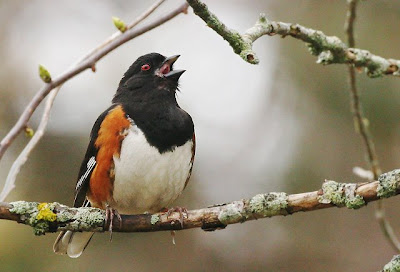 The Eastern Towhee was the second bird I was really hoping to see, and we did close to the end of our trip.
Posted by Angie in T.O. at 7:21 AM 4 comments:

BIRD NERD I AM 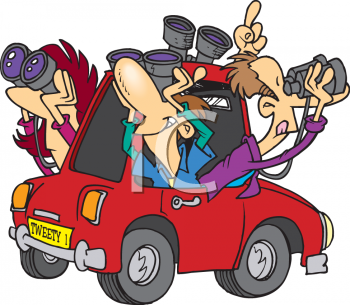 Yesterday our love of birds and bird watching reached a new level when we went out with an organized group for the first time.

We found out about the free outing through a flyer posted at the bird store we visit weekly for supplies or a good bird chat. The walks are taking place on Mon. and Wed. through the month of June at 7:30AM and last about 2 hours. We were in the store on Tues. and are on our last week of holidays, so yesterday was the only day we could go this month, we even gave up tickets to go see "We Will Rock You" because we knew we'd have to be up early and well rested to enjoy the bird outing.

It was so worth getting out of bed early for! We met about 14 others and were led through an area of Riverwood Conservancy in Mississauga by a birding expert. We saw many different species, more then we ever had in one outing and learned many new things.

We enjoyed it so much we plan on going back in September when they have organized walks again on Wednesday afternoons and are even looking into joining a birding club.

I've posted three pictures of some birds I saw yesterday for the first time. I didn't take these pictures, I was enjoying them with my eye yesterday, not watching through a lens. 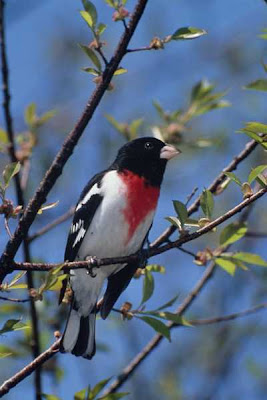 Male Rose-breasted Grosbeak. I actually gasped when I saw him!

Common-Yellowthroat. A type of warbler. 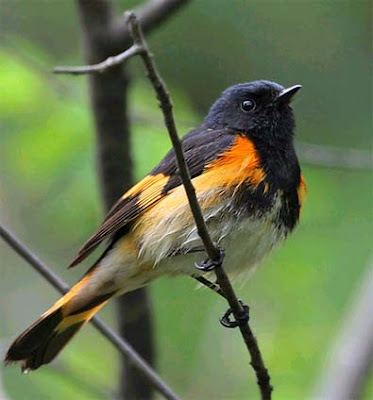 American Redstart. I believe I saw one of these when I was in PEI two summers ago, but got a much better look yesterday.
Posted by Angie in T.O. at 5:36 AM 3 comments: 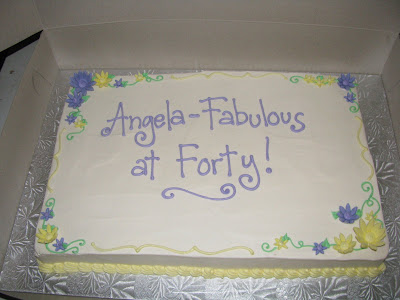 I'm going to interrupt my Nova Scotia trip posts to tell you about something exciting that happened on Wed. June 10th, I turned 40!

I started the celebration early by having some friends over for a BBQ and birthday cake on Sunday afternoon. It was nice to have my mother here to celebrate my birthday, that hasn't happened in 20 years.

On Wednesday, Rob, my mother and I went to Cora's for brunch before dropping my Mom off at a friends place for the night in Cambridge. Rob and I went over to St. Jacob's for the day and spent the night at the Maryhill Inn. 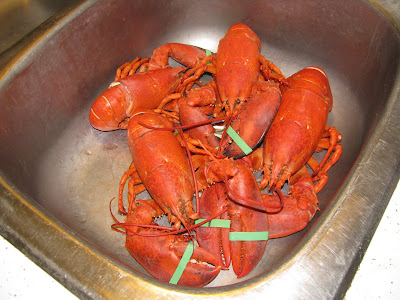 There are certain foods I anticipate with a watering mouth every year when I go home, as I only get to enjoy and indulge in them while there. 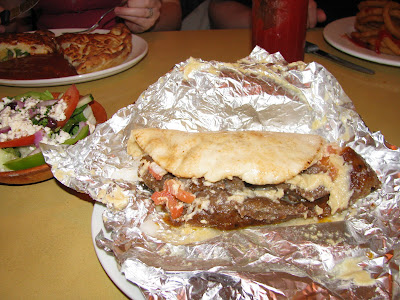 It may not look very appetizing, but a Damascus Donair is a must for me. 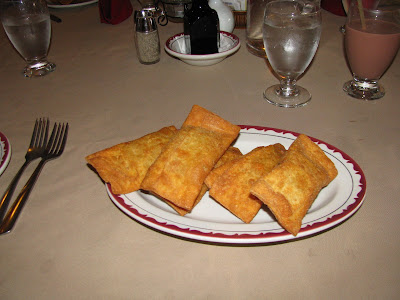 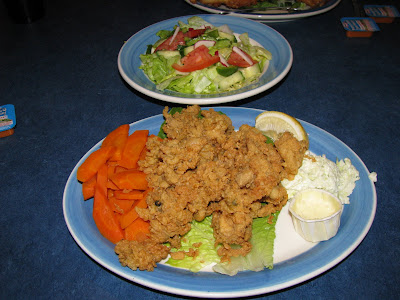 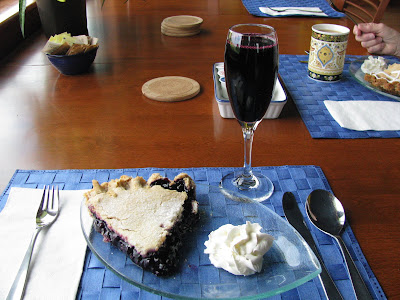 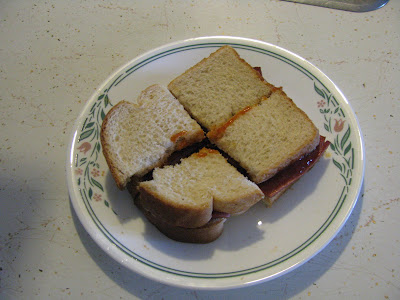 A fried bologna sandwich with ketchup, a maritime tradition! 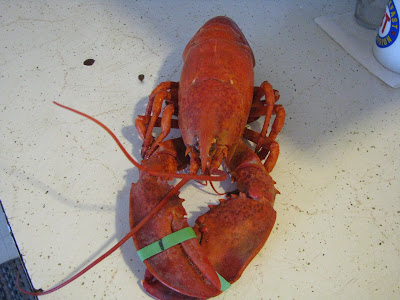 A fresh cooked lobster before. 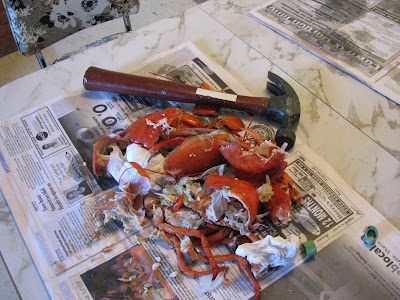 THE CHIMNEY SWIFTS OF WOLFVILLE, NS 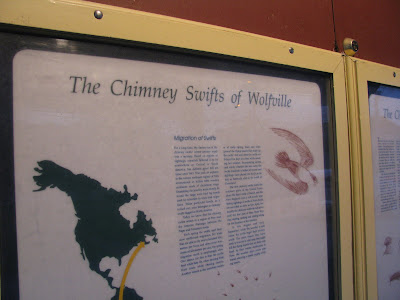 When I landed in Halifax on May 29th my mother picked me up at the airport and we drove to the beautiful little town of Wolfville to spend the night with my Aunt Lucille and Uncle Jim.

I was quite excited about going over there, as I knew about the chance to watch the chimney swifts go in for their nightly roost and add another bird to my life list. A "life list" is the list of birds you see in your life-time, and for a birder it's exciting stuff!

To make a long story short, Robie Tuft, a long-time Wolfville resident and renowned ornithologist saved an unused factory dairy farm chimney from being destroyed and had it relocated to the centre of town, as it had been used for many years by the migratory bird, "The Chimney Swift". The chimney is now located at what is called the "Robie Tufts Nature Center" and you can read all about that and the bird by clicking the name.

Here's what I experienced. At dusk a few of the birds start circling the chimney and they do this over and over, making huge circles over the town, but always coming back to the chimney. This goes on for anywhere between 30 minutes to an hour. As they do this, more and more of the birds gather, until the whole flock is there, and as they do this, the circle gets smaller until they are just swooping and circling over the chimney. Just before the sun sets, in one magical moment, they start down the chimney, one after the other to roost for the night. It's over in a moment but so miraculous to see! I saw about 100 birds go in for the night.

It was difficult to get a good picture as it was a little rainy that night, and I didn't want to watch the whole thing through the lens, as I may never see this amazing bird show again. 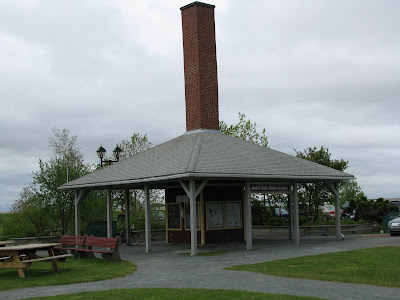 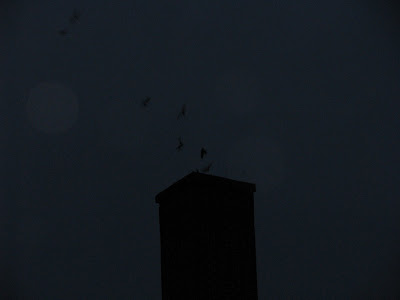 A few of the Chimney Swifts going down the chimney to roost for the night.
Posted by Angie in T.O. at 6:50 AM 2 comments: 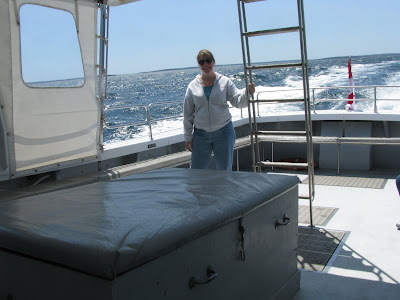 I got back from my trip yesterday afternoon, but still have two more weeks of vacation ahead and lots planned. My Mother came back with me on the train and is here for the next week.

I had a wonderful time in Nova Scotia. Did so many things that I will have to take some time to blog about after vacation has come to an end and things calm down. I'll probably be blogging about this vacation into the winter!

Highlights of my trip that I will be blogging about in the future; Seeing the Chimney Swifts in Wolfville, going out on a boat in Lunenburg and seeing the Puffins, spending a great afternoon in Tatamagouche, and of course, eating fresh seafood everyday!
Posted by Angie in T.O. at 6:26 AM 3 comments: