The next day we took advantage of Cedar Grove's offering to pack a picnic lunch if you wanted to be off site during lunch time. We left for Algonquin Park after breakfast. We hadn't been to the park in over two years, and it was really nice to get back there.

We weren't really sure what to expect in way of wildlife this visit, with the temperature being so warm. I know Rob was disappointed we didn't have a moose sighting, but getting to hand feed a few Gray Jay's made up for it. I didn't think we'd see any, I associate them with snow, but I guess a free handout is too much to pass up.

Always a good day when you're in Algonquin Park, and I look forward to our next visit.

To learn more about the Gray Jays in the park, please click here.

After a hearty breakfast we made our way to an area we have never visited before, Limberlost Forest. We had decided to hike around Buck Lake, 8.5km. We didn't see a lot of wildlife but it was a very pretty and enjoyable hike.

We went back to Cedar Grove for lunch, and then went in to Huntsville to explore the shops. After returning to the lodge we enjoyed the dock just below our cabin. To just sit with a coffee in such peaceful surroundings and watch the couple young Loons that were around was so relaxing.

We had a delicious dinner that evening, and took another walk around the grounds to enjoy the stars, this time before bed. It was a great day.

Rob and I have been enjoying vacation this past week. The first part of our vacation we spent 4 days, 3 nights in the Huntsville area at Cedar Grove Lodge. It was our first time there, but I don't think it will be our last. Beautiful surroundings, lovely private cottage, and 3 meals a day included!

It was overcast when we left Toronto last Sunday morning, and it was raining heavily when we arrived in Huntsville. Oh well, we made the best of it by having lunch at a local restaurant and doing a bit of shopping at a mall before heading to Cedar Grove to check in. (Click on Photos to Enlarge)


After we got ourselves settled we enjoyed a delicious 3 course dinner in the dining room. You have the same table your entire stay, which I loved. It was like they knew me, we were in the corner by a window and I could over look the entire diningroom.

It was still very over cast as the sun set, and cloudy when we went to bed. I happened to wake up a little after 3am. I was curious to see if the clouds had cleared and they had. I could see lots of stars from the window! I miss being able to see a sky full of stars every night. I asked Rob if he'd come for a walk with me to look at the stars. He did. So, for probably a half hour between 3:30am - 4am we walked around the resort grounds enjoying the stars. We kinda crazy like that.

It was hard to capture the beauty of the night sky, especially without a tripod, but I asked him to take this anyway.

Ok, back to bed for a few more hours, we have a full day tomorrow!

Thanksgiving weekend was a very special weekend for a couple of reasons. First, our friends, Dave and Andi got married, and second, I got to meet some more of my extended family.

In case you are not in the loop, Andi, who I have been friends with since February 2012, discovered that we are actually 5th cousins earlier in the year. Friends to family!! You can read all about that great bit of news here.

Now, back to last weekend. I've pondered how I was going to write this blog all week, as it's not really my story, but theirs, but I will share my part in it.

Dave started planning this happening long before he let Andi know, and I was excited when he asked for a bit of advice from me, though he worried I'd blab to my cousin. I didn't by the way, I kept that secret. Like Rob and I, they wanted a small, intimate and casual ceremony. Thanksgiving weekend was the chosen weekend, as her parents would be visiting and her brother and sister-in-law moved to Toronto this past summer. I believe this is only the 4th time they have all been together in many years due to her brother living all over the world for work.

When Andi called me the evening of August 28, I knew by the excitement in her voice that Dave had finally let her in on his "plans". When she asked if Rob and I would be their witnesses, we were honored.

They got married the morning of Saturday, October 7th in their home, followed by a lively brunch at Cora's.
The marriage/Thanksgiving celebration dinner took place on Sunday, October 8th.  And what a celebration is was! We started with Champagne and appetizers. 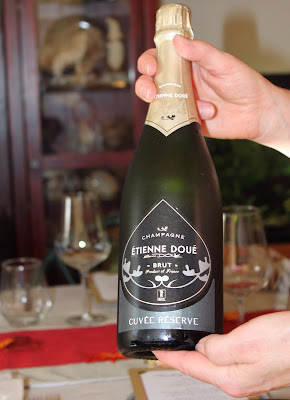 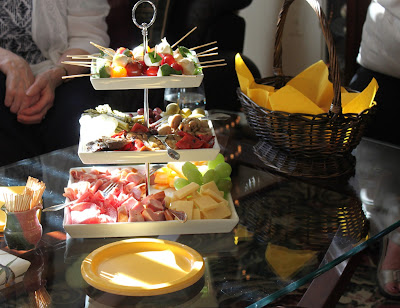 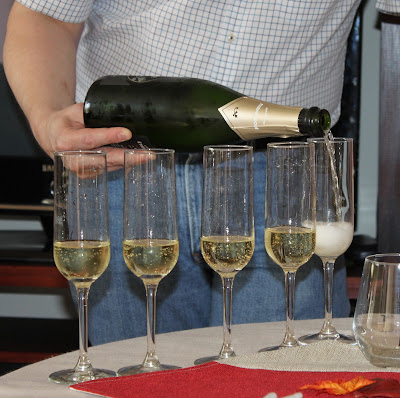 Followed by a beautifully presented and delicious meal. (click on photos to enlarge)

I honestly don't remember enjoying a Thanksgiving weekend more. It was one of those weekends that I will always look back on fondly. It was wonderful to meet my other cousins and play a part in Dave and Andi's special day. We enjoyed great conversation, delicious food, wonderful company and lots of laughs.

Big congratulations to Dave and Andi!

September was an interesting month. It started off great with the long weekend, and our trip to Aberfoyle. We celebrated Rob's birthday the weekend after, but then I was knocked down with a nasty surprise. Thankfully it ended on a high note. Let me catch you up.

Rob's birthday was Friday, September 15th. He had booked the day off to make it a long weekend, and I only worked the morning. After picking me up at the subway we went to a couple different European deli's to pick up a few things, and then made our way to a restaurant for lunch. Rob had been wanting Schnitzel, but the restaurant had changed owners and then had closed. After that big disappointment we decided to head home and enjoy some of the goodies we had picked up at the deli for lunch and dinner instead. We also enjoyed the Black Forest Cake his Mom had dropped off to him earlier that day.

Saturday was a pretty low key day, though we did make it down to the Ukrainian Festival in Bloor West Village for a lunch of perogies.

Sunday we went to The Owl Foundation's Annual Open House for supporters. I have lost count of how many years we have attended, but we always learn something new, and it's always great to see the owls and the dedicated people who work and volunteer there.

Here are some pics of some of the resident owls from our day there.

After a another great tour, we went for lunch and ice-cream in Vineland before heading back home.

I'm glad we had a nice weekend together, because I was in for a nasty surprise come Monday. When we went to bed Sunday night, Rob noticed a hand size rash on my back. "What's that on your back?!" I had a look in the mirror and was as surprised as he was. It wasn't itchy and I wouldn't of noticed it, if I had of went to bed alone on Sunday night like I normally do. We figured it was bug bites from our outing earlier or that I brushed up against a plant, and had a reaction. I put some Witch Hazel on it and went to bed.

I had booked Monday morning off to spend with Rob before we both went to work. I didn't feel great when I got up, rather flu like, nauseous and feverish. I actually thought about calling in sick, but decided to tough it out and go in for the afternoon like planned.

I starting feeling worse as the day went on, and when the mysterious rash started hurting in the afternoon I called my doctor's office. I couldn't get in to see him, but I could see the doctor at the Walk-In Clinic located next to my doctor's office, who I have seen in the past. I went right from work. I had to wait 2.5 hours to be seen, but I am glad I went, as my fear was confirmed, I had Shingles.

Luckily I caught it early and was able to take anti-virals for the next 7 days to help keep it from spreading and all the other nastiness associated with an outbreak. I remained home the rest of the week dealing with mild pain, flu like symptoms and extreme fatigue.

Except for still dealing with some episodes of fatigue, I was feeling much better come Monday and was able to return to work. I was happy about that because I had a 4 day long weekend to look forward to and a getaway planned with a girlfriend, that I had been worried I wasn't going to be able to make.

My friend, Pat and I spent 3 days, and two nights at the charmingly rustic Sir Sam's Inn. Rob and I had spent a few nights here last Fall, and I knew my girlfriends would enjoy it too. It was the perfect place for a relaxing weekend.

Before returning to Toronto on Sunday, we made a stop at the Haliburton Wolf Centre. We we lucky enough to see all 11 wolves in the pack! We we thrilled, as it was Pat's first time there, and I had warned her, we may not see any. But the wolves were enjoying the large sunny spot just off the visitor centre when we arrived.

I only had the power shot to take pics with, and  you take pictures through the one way glass. I took a lot of photos because they were all right there.

Despite the hiccup in the middle of the month, September was a pretty fun filled month.