We decided not to put up the large Christmas tree this year. With Merry & Molly still young, playful kittens, we decided we didn't need the bother of trying to keep them out of it or knocking it over.

I had bought a small table top tree for my office at work years ago, and decided that we would use that as our tree this year. I can honestly say the kittens didn't bother with it once, and I put it out well before Christmas, November 15th to be exact.

Not having a large tree did cause one little issue....where to put the gifts? I got an idea from the toy drive at work. We wrapped the outside of a large box and kept it in the room our budgies sleep in. (Merry & Molly do not have access to this room). We put the gifts in there and brought it out Christmas morning.
The Christmas box worked well, but I am looking forward to having a large Christmas tree again next year, even if it does mean a few broken ornaments and kitty chasing.
Posted by Angie in T.O. at 5:46 PM No comments: 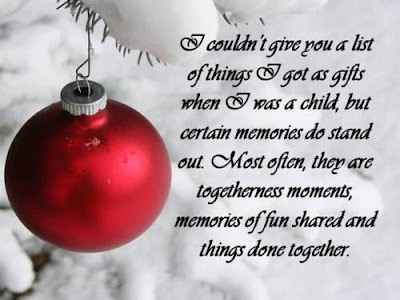 Last week, while riding the subway to work, I was talking to a friend and mentioned how much I still had left to do for Christmas. We were talking about the different things that had to get done, and she casually mentioned. “you don’t need to do it”, when I was trying to figure out when I was going to get my baking done. I thought about that statement long afterwards. Why do I feel the “need” to do certain things every Christmas? If I didn’t make Seafood Chowder, bake Christmas cookies or send Christmas cards, would it really matter? I thought about this for a long time.

Most of us remember the Christmas’s from our childhood fondly, and the foods and traditions that we had at that time of year are very important to us. Christmas changes as we grow up, people move away, loved ones pass on, and people marry and have families of their own, and start their own Christmas traditions.

Those “chores” that I feel I must do every year at Christmas time is the string that ties me to the Christmas’s I had as a child, they provide some familiarity, comfort, and a sense of home. So, to answer my own question, "yes", it does matter, even if it only matters to me.

Rob and I have started our own Christmas traditions and they complement the traditions I carry on from my childhood. I may huff and puff a little every year about all the stuff I have to do at this time of year, but as Rob reminded me yesterday, I love this time of year and all the Christmas craziness that comes with it.

Tomorrow is my last day of work until the new year, and I am looking forward to all the festive fun this time of year has to offer and sharing a bit of my Christmas traditions with friends and family.

If Meadow could of talked, I think she would of stood up on her hind legs and yelled "I LOVE CHRISTMAS!". She really did seem to love this time of year, and the closer December 25th gets the more I miss her.

I met Rob in January of 2004, when Meadow was just 6 months old. He didn't have a tree the month before and Meadow's first Christmas probably came and went without any changes in her daily routine. All that changed when I entered the picture. Right from the get go she seemed to enjoy all the fun and festivities of the season and was involved in all aspects of it in the house. Oh the excitement of the tree and finding that one ornament to bat at every year. In her later years she seemed to enjoy sleeping under or near the tree. She always assisted Rob with his wrapping and how she loved to play in the mess of the paper after gifts were opened Christmas morning.

We didn't know that last year would be our last Christmas with Meadow, but because of a health scare she had earlier that year, we took more pictures of her at Christmas and felt a little more grateful that she was with us to celebrate.

Christmas will be different this year, not just because Meadow isn't with us, but because this is our first Christmas with Merry & Molly. Like Meadow's first Christmas, they won't have a tree to play in this year, as we choose not to put one a big one up. We will always miss Meadow, but we are looking forward to the amusement Merry & Molly are sure to bring us come Christmas morning, and that will ease the hurt a little.
Posted by Angie in T.O. at 11:21 AM 1 comment:

Merry & Molly turn 7 months old on Monday. They are almost adults now, and the time has flown by. They went in for their spay operation on November 2nd, and we were like two worried parents waiting to hear everything went fine, and it did.

Their operation was on a Monday and they stayed overnight. We picked them up Tuesday afternoon and spent the remainder of the week at home with them. They were fine, but trying to keep two young kittens from too much play time while they recovered was exhausting for Rob and I!

Molly is our “hippie". She’s a lover not a fighter, and we laughed when we found out Merry was teaching her how to hiss at the vet when they were there for their operations. Molly would prefer to purr, and when her motor gets running it can be very loud. Molly doesn’t seem to need or want much. She loves her food, to be brushed, lots of sleep and to be loved. She also has a fascination with the computer screen. She’s one very happy go lucky girl!

Merry on the other hand is a total “diva”. Everything from purrs to playing is on her terms. She prances instead of walks and has a fascination with water. She doesn’t seem to need as much sleep as Molly, and can play fetch as well as any dog, until of course she gets bored with you. When she does want your attention, she lets you know it and can be very loving.

We are slowly seeing the kitten craziness slip away as they grow up, and that’s both a relief and sad at the same time. We are looking forward to a sense of calmness in the house again, with just a little Merry & Molly mayhem from time to time to keep things interesting.

Rob's drink of choice is whisky. He has a few favorites; Forty Creek, White Owl and Jack Daniels. These would probably be his top three and he drinks Forty Creek more than any other. I'm not even sure how he learned about Forty Creek Whisky, but he has been enjoying it for a few years now. It's made here in Ontario, and we have drove by the location where it is made numerous times without stopping in. On our way home from Niagara Falls a couple weeks ago we finally visited. We knew the tours weren't running that day, but we wanted to visit the gift store, and I'm so glad we did, and they probably were too!

Rob isn't a big drinker but enjoys a couple through-out the week. He has one every Wednesday after work, and "Whisky Wednesday" was born, much to the amusement of his Facebook friends. It's kind of taken on a life of it's own. Some nights others even join in an enjoy a drink themselves.

We spent quite a bit of time there chatting to the employees in the shop and learning about the product. I told them how I usually pick up a bottle of the special reserve blends for Rob every Christmas, and have tried some of the recipes on their website, to great success and I even caramelize onions with it. We will definitely be returning for a tour and maybe even attend one of their Whisky Weekends held in September.

When he gets a new bottle of a blend he's never had before we always do a shot together, straight, it's tradition. Cheers!

Rob and I were on vacation the first week of November and spent a day and night in Niagara Falls. Merry &  Molly were  dropped off at the vet for their "Spay Day" (blog to follow on that) on the morning of Monday, November 2nd, and we were on our way. The weather was spectacular and we really enjoyed the drive, as we had borrowed Rob's Mom's car and could listen to Hair Nation on Sirius Radio.

We made one pit stop along the way, to The Owl Foundation, to drop off some carriers from a release Rob had done a few weeks before. We enjoyed a nice visit before heading on our way.

We arrived in Niagara Falls around noon, and were able to check-in early at our hotel, Four Points by Sheraton. Once settled, we made our way to Clifton Hill for some fun. It was on our walk to Clifton Hill that we received the call from the vet, the kitties were awake and recovering nicely. WHEW! We could now relax and enjoy our trip.

Rob and I had never experienced Niagara Falls together, so we wanted to do some of the classic stuff. We went to the Movieland Wax Museum, played  Wizards Gold, Ghost Blasters, and had three games at Strike's Rock N Bowl. We had a blast!

After dinner we were going to hit the casino, but we found out our hotel got the channel WWE's Monday Night Raw is on. So, we opted for the double whirlpool bath in our room to watch wrestling from. We did hit the casino, after breakfast at IHOP the next day. We made a deposit at the casino this trip.

We had a such a good time, we may make this a regular Fall vacation trip.
Posted by Angie in T.O. at 7:39 PM No comments:

Rob and I love Halloween. We enjoy dressing up, putting up decorations and giving candy to the trick or treaters. He had to work last year, so this year was extra special. Halloween is as much fun for the adults on our street as the kids. Most of the neighbors who hand out candy stay outside, and we all mix and mingle through out the evening. We also enjoy a few adult treats in the form of jello shooters and the like. The weather was great this year and fun was had by all!

Feel free to stop by next year for some candy and a jello shooter! Hope you all had a "Happy Halloween"!