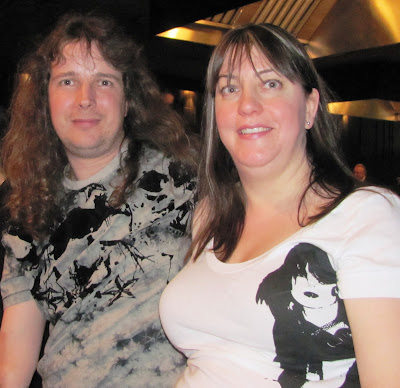 Rob and I rarely go downtown together, so this weekend was not like one before, as we ended up in central Toronto on both Saturday and Sunday.

Saturday had us in my old stomping grounds around Bloor and Yonge to take in an afternoon showing of "The Runaways" at the Varsity theatre. We were joined by a few friends, Teena, Brian and Amanda. Rob and I are both fans of Joan Jett and Lita Ford, who were members of The Runaways, though the movie focuses more on the relationship between Joan and Cherie Currie, the lead singer. I enjoyed the movie, but was disappointed that a lot of stuff was left out, but that could be because I idolize Joan, and this was about the band, not just Joan. This movie is a must for any rock and roll fan, and I will definitely be adding it to my movie collection when it's available. 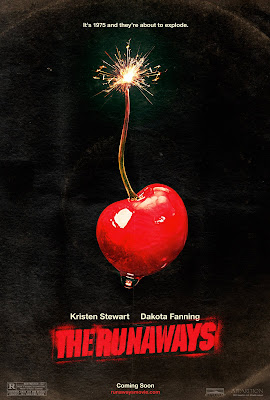 I thought both Kristen Stewart, who portrayed Joan, and Dakota Fanning who played Cherie did amazing jobs, especially Kristen, who had Joan's movements and attitude nailed. Though both of these girls are tied up in the "Twilight" pandemonium, I think they both have long and great acting careers ahead.

After the movie we headed over to a favorite Japanese restaurant in the area, "Yamato". It's one of those places where teppanyaki is the specialty and the masterful cooks prepare a feast right before your eyes. Rob and Teena had never been to a restaurant like this before and I was very proud of Rob for trying a piece of my sushi pizza! He's not one for trying new foods, so this was a huge deal, he even ate the roe! Way to go Rob! 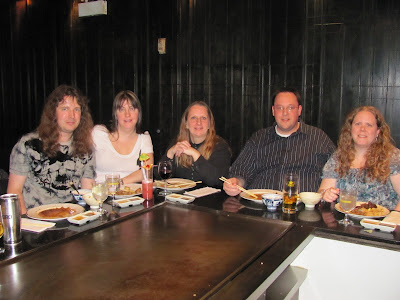 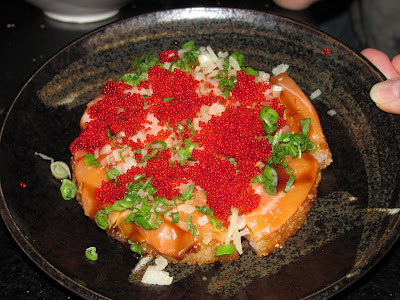 Sunday had us out of the house and heading downtown early to check out a new park we had just heard about, "The Brick Works". This place is so much more then a park, and we will be following its development now that we know about it. 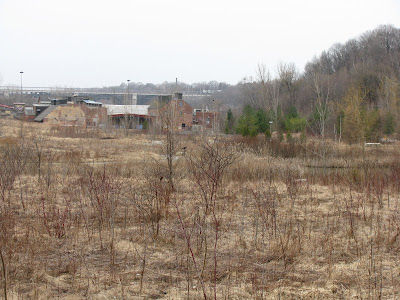 The main reason we headed here was because we heard of sightings of a bird that we had never seen before, a "Belted Kingfisher". We were both pleasantly surprised with the beautiful surroundings just east of the downtown core. It was a beautiful place to spend the morning listening to the sounds of the returning Red-winged Blackbirds that were everywhere. We were also treated to a fly-by of a Red-tailed Hawk, but the highlight of the day was seeing a new bird for the first time, the Belted Kingfisher, we were lucky enough to see a pair, who seem to nest on the cliffs at the back of the park. 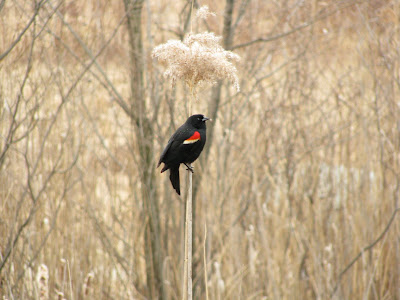 Rob took this picture of a male Red-winged Blackbird at the Brick Works. 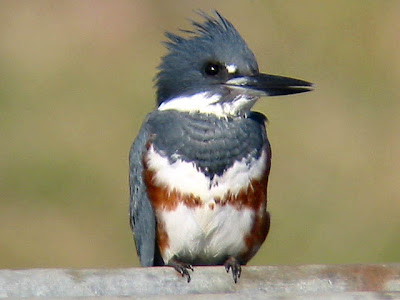 A female Belted Kingfisher.
Photo compliments of Google, as we spent most of our time looking at them through binoculars, unable to get a great shot like this.

After our outing we headed back to our part of the city for brunch at Dr. Generosity's before running a few errands and then going home to get ready for the work week ahead. It was a busy but fun filled weekend for us.
Posted by Angie in T.O. at 5:59 AM

It was fun hanging with you guys last night.

Thanks for introducing me to having food cooked before my eyes!

Wow, the belted kingfisher is a gorgeous bird!