Rob and I rarely "chase" rare bird species reported in Ontario, mainly because we work different shifts, and it's almost impossible for us to. But, a report came in Thursday night that we couldn't ignore.

When we visited Cape May a few years back, seeing a Blue Grosbeak, was at the top of my most wanted list, but it didn't happen. So when one was reported in High Park it was hard to ignore that "twitch" to go see it.

Rob texted me Thursday evening to tell me about the sighting. At first I was, "you should try to go see it in the morning." One of us should see it, but then I got to thinking. The sun is up by 6am, I don't start work until 7:30am. If Rob's willing to go early, we can both go try to see it, as High Park is only a ten minute drive from our home!!

So, we were in High Park shortly after 6am on Friday morning with fingers crossed we'd see the bird. The directions to the location to where the bird was seen were very good, and we found the area easily. There we two other birders there, and they quickly let us know the bird was there by pointing up. I know I would not of spotted that bird on my own, with the early morning light he blended in with the leaves well, looking more black than blue at that time.

We stayed for about 45 minutes before I had to leave for work. The bird got bluer as the light got better. Here is Rob's best photo from the morning. (Click on photos to enlarge)

Word got out about this sighting Thursday evening, and the crowds grew through-out the day Friday and over the weekend. As you can see from the map, he was quite out of his range. 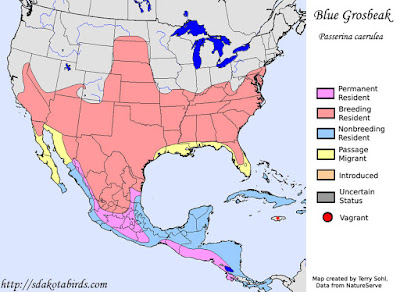 A few of our birding friends got to see the bird on Friday as well. Their pictures are used with their permission, and I thank them for that.

We did go back again Saturday to see if we'd see the bird again, and we did, but he was further away. It was fun seeing all the people that came to see him, and we had some rare sightings of birding friends we don't see often enough, so it was still worth the the trip.

This blue bird caused quite a bit of excitement over the weekend, and I'm glad to have been a part of it.