This past June I took one of the hardest trips to Nova Scotia I've ever had to take. My Father passed in April of 2021, but his ashes finally joined Mom's on June 21st, 2022.

This trip was weighing on me more than I even realized until after it was over. It was a whirlwind three night trip. I flew down on Father's Day and having my older brother, Jeff, and oldest niece, Ashlee, pick me up at the airport was the support system I didn't know I needed. I hadn't seen them since 2018.

They had flew down a day earlier and spent a day in the south shore so Ashlee could see Peggy's Cove, Lunenburg, and Mom's home town, Liverpool.

After picking me up at the airport we headed straight to Five Islands. A place we went to often as kids to visit family and camping. We also enjoyed deep fried clams at Dad's favorite place to get them.

It was fun surprising family who had no idea that Jeff and Ashlee were coming. I stayed with my Aunt Betty and Uncle Dennis for two nights and with Jeff and Ashlee the last night at the hotel, as our flights back home were very early in the morning.
Monday morning I took Ashlee for brunch before she had to start work, remotely on BC time. I then spent the afternoon going through boxes of pictures and other small items that Betty had collected for me when she cleared out Dad's house. That evening I went out for dinner with a couple school friends.
Dad's service was Tuesday, and it's all a teary eyed blur now. Many people attended that I didn't expect, like a high school teachers husband, who came in her place, as she wasn't able to. I held it together pretty good at the service until Brad's Paisley's "When I Get Where I'm Going" played, then the tears flowed. 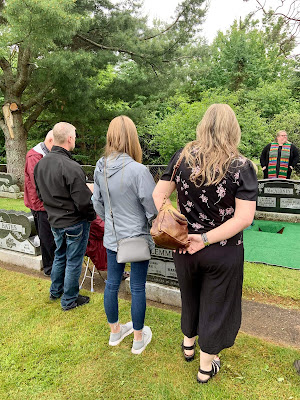 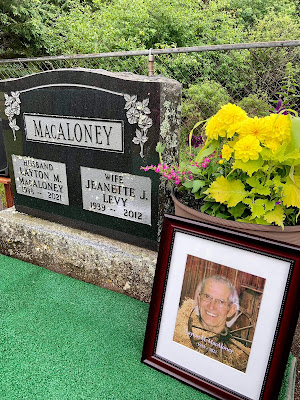 Friends and family gathered back at Aunt Betty's after the service. It was a wonderful turnout. I caught up with so many relatives and friends, even if it was only for a short time. I reconnected with cousins I hadn't seen in forty years! I am go grateful for everyone's support during this trip, it meant the world to me. I know Dad was smiling down on this gathering, he would of loved it!