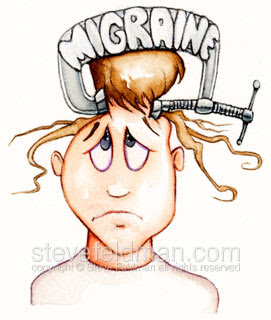 I was 16 years old the first time I had a migraine. We we're at at my grandmothers and we were getting ready to head back home, a two hour drive. It was horrible. I held my head against the side of the window the whole way, because it was cool, and hoped the pain would stop. That was the longest drive I ever took, and was the beginning of my migraine history.

Telling people you suffer from migraines is tricky. If your lucky, they have experienced them before or know someone close who has and really understand what you experience. In most cases though, people just think it's a bad headache and to "suck it up".

I can't suck it up, I've tried. My migraines can sometimes literally bring me to my knees. I've had them so bad on a few occasions I'm sick to my stomach and I've gone to the hospital more then once because of them.

I didn't get a lot of migraines as a teenager, maybe one or two a year, and some of my mothers Tylenol 3's usually took care of it, along with spending the day in bed. My migraine madness really started in my late 20's and early 30's. I was having them weekly, and they were getting worse.

My boss's wife at that time also suffered from migraines, and he really understood what I was going through. So much so, that he had me exempt from our sick day policy at work. Other words, I have unlimited sick days.

I've had lots of tests done, and tried "beta blockers" to stop them, no luck. I was however given a new pain medication to try. Imitrex was specifically made to target the nerves and blood vessels that are believed to trigger a total migraine. It not only deals with the pain, but the nausea, sensitivity to light and sound as well. They work well, and if I can catch my migraine when it's just coming on my day won't be a right off. Unfortunately for me, they 99% of the time come on in the middle of the night, and are full blown by the time the pain wakes me up.

They are not cheap, one prescription of just 6 pills is over $100, and I go through 2 prescriptions every month. I'm very grateful for my drug plan at work.

I've had to cancel many social events due to them, and I hate that most of all. It's hard to tell someone you can't make the movie, dinner or party because you have a migraine, it always sounds like a lame excuse, because your wondering if they really understand or think your just blowing them off. I've gotten better at figuring out when I'm migraine sensitive and avoid planning social events during this time.

I had a migraine wake me up at 4AM this morning. It was full blown and the nausea was horrible. I got out of bed and took a 100mg Imitrex ( I have 50mg ones as well, that work if I catch it early enough). Rob got me a cold cloth for my forehead. Neither one of us slept very well after. I stayed home from work today. Even after the pain is gone, the effects on my body last another 8-10 hours, I'm drained. I have no energy to do anything. It's like the migraine sucks the life out of you. It's not fun.

I tell people I have a great life, and I do, but my life includes migraines and I do my best to deal with them the best I can.
Posted by Angie in T.O. at 3:29 PM

I used to get wicked headaches when I was younger but nothing close to what you experience.

Sorry to hear you are suffering so much.I know how you feel although my migraines are not as bad as they used to be.

Thanks for the comment on my blog its much appreciated

I get migraines too. I never got them until I got pregnant with my last child and ever since then I get one every couple of months.