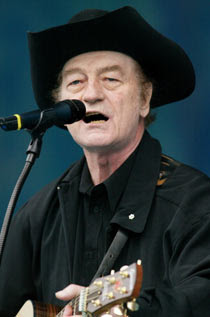 Yesterday this fine country of ours turned 142 years old. Rob and I had decided earlier in the week that we were just going to spend the day together and stay home. Still, I wanted to do something to acknowledge the day.

I did something I haven't done in many, many years, I dug out my Stompin Tom Connors cassette and played the whole thing, a couple times!

For those of you who don't know who Stompin Tom Connors is, I'll give you the short version, he's a proud Canadian who also sings folk/country songs all about the great country of Canada, every inch of it. Some of them are silly, catchy songs and some are serious history lessons in some tragedies that have happened here.

My very first concert was Stompin Tom, I was 5 years old and my father took me. I can still remember him walking out to play, dressed all in black, carrying his "board" which he stomps his foot on. I remember he told a joke about his home province of P.E.I., and 15 years later when I saw him again in Toronto, he told that same joke.

He's touring again this summer, and I'm going to look into going to see him again, as he's 73 years old now, and this may be my last chance to see this very proud Canadian in concert once again, singing about the country I love so much.
Posted by Angie in T.O. at 11:15 AM