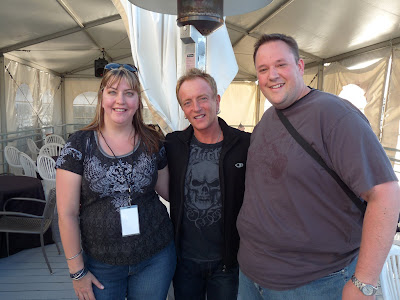 I once had a friend tell me I had the whole horse up my ass, not just the horse shoes when it came to my "luck" in meeting the heavy metal bands whose posters were my wallpaper of choice as a teenager.

I've definitely had fate on my side a few times, a chance encounter with Tom Keifer (lead singer of Cinderella) on Bay street led to an invitation by him to be put on their guest list for that nights show. I won an all expenses trip to Orlando, Florida for the VIP Grand Opening of the Hard Rock's Vault Museum where it was like my teenage bedroom wall came to life! I got to attend a party with Brian Johnson of AC/DC, Zak Wylde of Ozzy Osbourne's band and Black Label Society, Nikki Sixx of Motley Crue, Slash and Duff of the original Guns N Roses, Dee Snider of Twisted Sister and so many more.

Two highlights of that trip; One, getting a second chance to talk to Nikki Sixx. I had met him a couple years earlier at a music store signing, but was so dumbstruck I couldn't say anything. Getting a second chance to actually talk to him was awesome and a lot easier in a party atmosphere when I didn't have a time line of how long I could chat. Two, like me, Duff McKagan is an early riser, and I'm thrilled to say I didn't get to have breakfast with him just once, but twice! Super nice guy and I enjoyed our talks over breakfast immensely while everyone else was still sleeping.

One of the things I love, even more then me meeting my favorite bands is when I get to witness a friend meet theirs, and that happened again this past Saturday.

As a 40th birthday present to myself, I treated myself to the "I Love All Access 5 Star VIP Package" for the Def Leppard concert on Saturday, July 4th at the Molson Amphitheatre. The package included a pre-show party, goodie bag, and a seat within the first 10 rows, we got second row seats! I went with Brian, a friend of mine who is a huge Def Leppard fan too. I was thrilled when Brian got to meet one of his idols, Phil Collen, who plays guitar for the band. I knew the elation he felt, having experienced it myself so many times before. And I was pretty pumped to be meeting him too, but truly, more for Brian.

I've often wondered if these "rock stars" know how much meeting them means to us, the fans. They meet so many people, and sometimes the meetings are just mere moments that they most likely never think of again, but us, we carry them around in our hearts forever, like priceless treasures.

I have many more stories I could share, I have been an 80's metal fan for well over half my life now and their still out there touring and I'm still going to the shows. It's only rock and roll, but I love it!
Posted by Angie in T.O. at 9:11 PM

So glad you had such a fun fun time!

I agree. That's so cool Angie. Glad you had such a wonderful time. Monica