THE WIZARDING WORLD OF HARRY POTTER 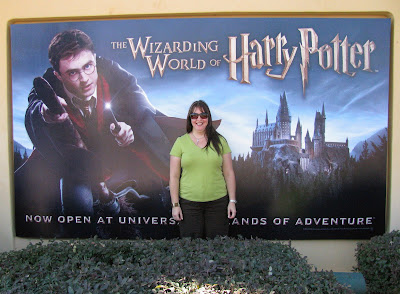 When I found out the "Wizarding World of Harry Potter" was opening just four months before my year long planned trip to Orlando, Florida with my brother and his family, I knew I had to go. As a Harry fanatic I decided to go down a couple days early to check out the world of Harry Potter at Universal Studios. Lucky for me, one phone call to a girlfriend meant I didn't have to see it alone.

As you pass under the gates into Hogsmeade you feel as you stepped right into the books/movies of Harry Potter. The first thing you see is the Hogwarts Express, the train that takes the young witches and wizards to Hogwarts, the school of witchcraft and wizardry. Walking along the streets of Hogsmeade you see lots of shops you will recognize from the stories. You can buy a chocolate frog or some Bertie Botts Every Flavour Beans from Honeydukes. I had a grass and pepper flavoured one! Zonkos has Extendable Ears and lots of fun joke type toys. You can also buy a wand from Ollivanders Wand Shop. 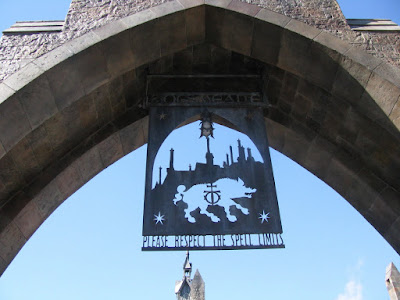 The entrance into the world of Harry Potter. 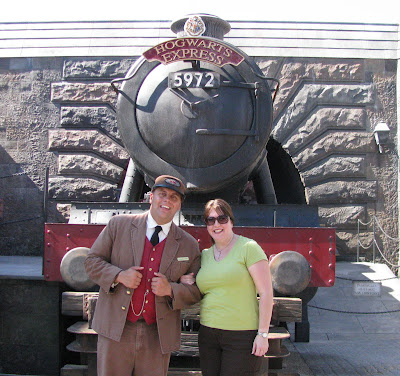 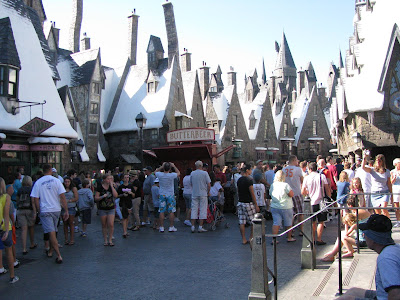 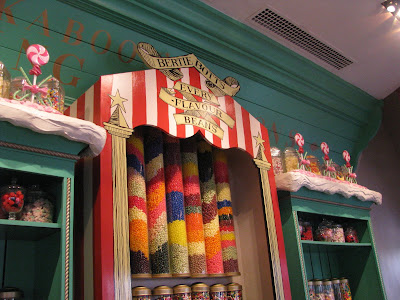 Our first day there I just kinda took it all in, it was kind of overwhelming. I think Greg and Pat expected me to burst into tears at any moment, and that moment did come, just not on the first day.

We walked around and looked at everything. Everywhere you turn you see something from the story! The book of monsters is kept in a cage in one of the shops, it does growl and move! Hermione's dress from the Christmas Ball hangs in one of the shop windows. There isn't just stuff to see, there is lots to listen to too! Moaning Myrtle haunts both the girls and boys bathrooms, and a baby Mandrake plant screams from a shop window as well. 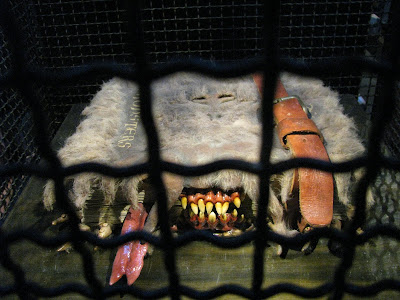 The Book of Monsters.

We did one ride our first visit, The Flight of the Hippogriff. You pass by Hagrid's hut as you enter and then follow his instructions on how too properly greet a Hippogriff. Just before you board the family friendly, small roller coaster, that still scared me, you bow to Buckbeak. 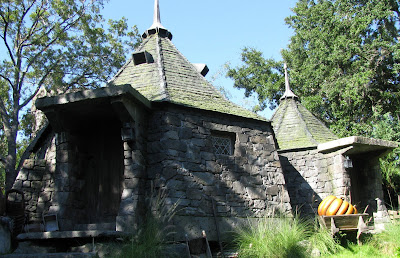 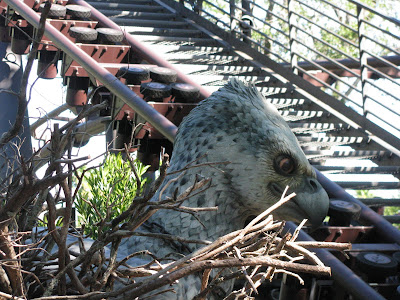 Buckbeak bows before you get on the ride.

After the ride we decided to finally have something we had talked about for weeks leading up to the trip, Butterbeer! You can have it two ways, frozen or cold. As it was an extremely hot day we all had frozen. It was really good. I wish I could say it tasted like this or tasted like that, but it doesn't, it has it's own unique taste. 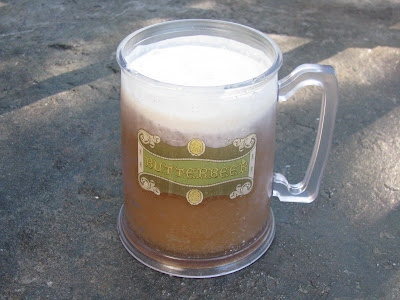 The much anticipated Butterbeer! 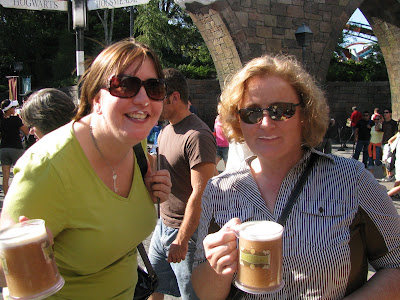 Pat and I enjoying a frozen Butterbeer.

The first thing on our agenda for the second trip there was "Harry Potter and the Forbidden Journey Ride", and we arrived bright and early to do this, as we had heard the line up could be quite long. The wait goes very fast though, as you actually tour the Hogwarts castle as you wait for the ride, and trust me, there is so much to see in this castle, time flies!

You can tour through the castle without going on the ride and we had done that the day before. You see Dumbledore's office, and he comes out and talks to you. The portraits hanging on the castle walls move and talk, just like in the story. You see the four house containers holding their winning gems, Gryffindor was in the lead! You also walk through the Defense Against the Dark Arts classroom where Harry, Ron and Hermione come out from under the invisibility cloak and talk to you. Ron made it snow on us! You also see Gryffindor's common room. 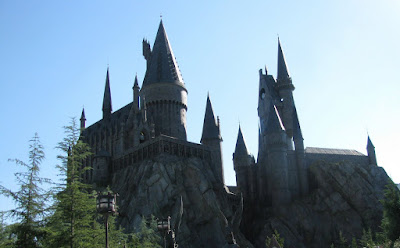 As we got really near the beginning, Pat bailed, she get's motion sickness too. This just made my nerves worse. You see a couple things as you near the beginning of the ride that you don't see on the castle tour, the sorting hat, and yes, it talks. Also, the fat ladies portrait guarding the entrance to the Gryffindor common room talks to you as you pass, and the entrance to Dumbledore's office is seen as well.

The next thing I know, I'm sitting on the ride, and I'm scared. Greg asks me if I'm ok, I say "no, I wish I could get off". It's too late for that. And then it happened. I heard Hermione talking in my ear, telling us to count to three and say "observatory", and then "WHOOSH"....we're flying! And then Harry and Ron are there, in front of us, leading the way! We fly over the castle, and Hagrid is telling us to keep a look out for an escaped dragon, who attacks soon after. We fly into the forbidden forest and see Aragog, he spits venom at us! We see the Basilisk snake down in the Chamber of Secrets, and all along the way Harry and Ron are leading us on and talking to us. We enter the Quidditch field and then Drako is there asking Harry if he's showing off for his "Muggle Admirers" while we're trying to get away from the Dementors. Then we're flying over the lake and into the castle, and the whole Gryffindor classroom is there clapping for us, for making it, and then Dumbledore, Hagrid and the rest of the teachers and doing the same. The ride was over, and then, my meltdown moment.....I burst into tears, not because I was scared, though I did close my eyes a couple times, I totally got into this ride, screaming with delight most of the way. It hit me then, where I was, what I was doing, and I lost it. I'm 41 years old, I know I wasn't really flying on a broom with Harry and Ron, but for 4 and a half minutes I felt like it.

Greg wasn't sure why I was crying at first, but it didn't take him long to figure out it was from pure joy. One of the staff members asked me if I needed to sit down, and I told him no, that I was ok, just overwhelmed. When we found Pat I still had tears in my eyes, and when she found out why I was crying I think she regretted not going on.

After the ride we went into The Hog's Head Pub, so we could have a drink and I could get my heart rate to return to normal. A round of cold Butterbeer for all of us! 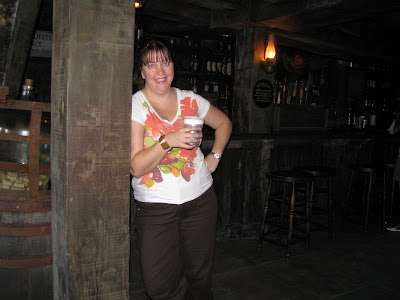 Enjoying a much needed cold Butterbeer at the Hog's Head Pub. 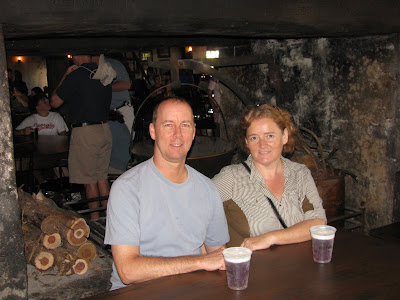 Pat and Greg enjoying the atmosphere of the Hog's Head, they said it was like being in a real British pub.

We decided to have lunch at the Three Broomsticks after some more shopping in Hogsmeade. No pizza slices or burgers here, it's all authentic British fare and beer. I had Sheppard's Pie and we all tried Pumpkin Juice, which was delicious! 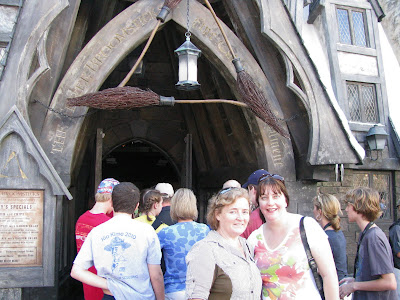 Waiting to enter the "Three Broomsticks" for lunch. 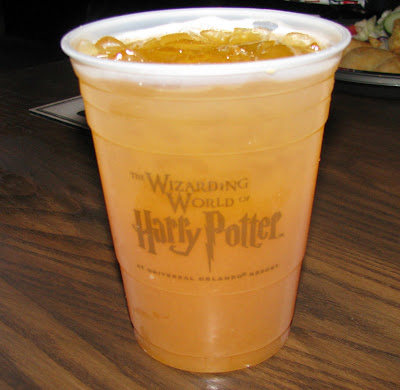 While we were eating, one of the park managers came over and talked to us. He told us that they tried 188 different recipes for the pumpkin juice before deciding on the one that we had. He also brought us over a sample of something that isn't even on the menu yet, Harry's favourite ice-cream, strawberry peanut butter. It was ok, they are still working on it. We also found out that they are going to expand the park, it's a bigger attraction then they expected, they start breaking ground in January, so it looks like we'll all be going back!

Before we left the park for the day, Pat asked me if I'd do the Forbidden Journey ride again, and I said yes. Greg was almost bouncing he wanted to go on it again so bad. I told Pat it was up to her, and she nodded, so the three of got to go on the ride together. I didn't close my eyes this time, and I was glad I didn't because I missed a couple things the first time; when you enter the ride to sit down there are floating candles above the seats, like in the Great Hall. Hermione isn't just talking in your ear, she's right in front of you a few times, and when you fly over the lake towards the castle, your flying not only with Harry and Ron, but with a whole flock of owls. Though I didn't burst into tears this time, I enjoyed the ride more, because I got more out of it, and the three of us did it together, it was the perfect way to end the day at the park.

There were a couple things I didn't do this time, the Dueling Dragons Roller Coaster, which I may never do, and Ollivander's Wand Shop experience. I had to save something for my next visit!
Posted by Angie in T.O. at 5:25 AM

I have to say that I'm sorry I missed this whole adventure. If we could click our heels and be there in an instant and home the following day... I'd do it.

I am just so very happy that you had such an amazing trip; but you still came home to me, Meadow, Misfit, Ralphie, Kermy and Muddy AND not stayed in the world of Harry Potter.

Sounds like you guys had a fabulous time! Your FB pix look fun!

So proud of you, cousin! It takes a lot of guts to do something that might make you uncomfortable. I'm glad that you experienced the pure "joy" of being a kid again and that Pat was able to enjoy it as well. This is an inspiring blog. Nanny would be proud to see how we all overcome our fears.

The last time I was at Disney World, I was ten. Joel & I got to MGM Studios with Uncle Tim. We ended up on the bee from "Honey, I shrunk the kids". It was a fantastic trip and someday I'd love to go back. I don't have the same thrill for Harry Potter, but I do have the fondness of being a child again and enjoying the most littlest things in life. I admire that attribute in you and it influences me to do the same.

I'm thrilled your trip was all that and more!

Hey. your blog was a great read! I was wondering if you could answer a question for me though- I went to the WWOHP in August and there wasn't a separate castle tour form the ride...but lately I've been hearing about this. Could you tell me more? I'm going there again in 10 days and would love to be able to see the castle in a leisurely fashion...