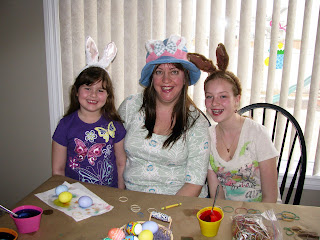 After spending ten days with my nieces in the fall of 2010, I knew then that I couldn't wait so long between seeing them again. I had hoped to get out in 2011, but Mom was the priority and a visit west wasn't to be.

"Operation Easter Bunny" officially began in December of 2011 when I purchased my ticket to fly out on April 5th, 2012.  My brother, his wife, Sandy, and I all kept the secret about my visit from the girls. It was a hard one to keep, and the closer the time got the harder it was, but we did it. Seeing their faces in the arrivals area where they were expecting to pick up one of Jeff's co-workers was well worth it.

We had a fabulous week! Easter is a great time to go visit the girls, as they get the week after Easter off from school, and we made the most of it. We coloured eggs, shopped, watched movies, went swimming, played Wii (they even created me, my own Wii character), laughed and talked, and just enjoyed being together. 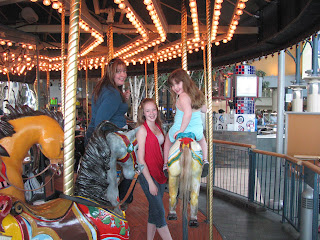 Enjoying a ride on the Merry-Go-Round.

The girls are 6 years apart and are quite different personality wise, I call them the "Sun and the Moon, as different as night and day, but each special and unique in their own way".   I even see a little of me in each of them. 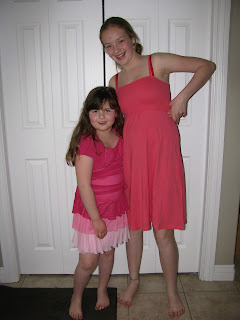 My only complaint about the week, it went way too fast.

I can see you love to spoil these two young ladies. Good for you!