This Christmas was a bit of a roller-coaster ride for many people living in Toronto and the GTA, with the massive ice storm that hit the city just a couple days before the big day. We were very lucky, we were only without power 8hrs total, once over night, and again the next day. We had offers to "pack up our zoo" and stay with friends if need be, but luckily for us, we were able to stay put.

When I think back over the past few weeks, my favorite memories and moments are from seeing friends and family. I "Skyped" with family members in other provinces and towns on Christmas Eve and Christmas morning. We enjoyed Christmas morning at home before heading to Rob's parents for Christmas dinner.

We've had so many Christmas gatherings with friends over the last few weeks, with more to come, as some had to be rescheduled because of the storm. We had and are having a great holiday season, time spent with the people who mean the most to you truly is the greatest gift. I think that's why the Christmas card I received from Rob this year really touched me.

We met in our mid thirties, and I have commented on more then one occasion on how I wish we had of met sooner, like some of our friends. Some of them have been together since high school. I guess we had different paths to follow before it was right for ours to cross. 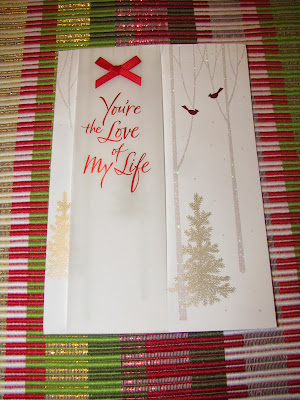 The inside reads;
Sometimes I wish that we had of met sooner, that the detours along the way could of been fewer.
But then something tells me we found each other at just the right place in our lives.
Now, here we are - right on time and so right together.
And I want you to know I would've waited forever for this, for you, for the love of my life.

Another reminder that it's not how much time you have, because there will never be enough, so make the most of the time you have.

I hope you all spent time this Christmas with the people who matter to you.