I was introduced to wrestling when I was a little girl, probably around the age of 5 or 6. I can still remember my Dad watching Atlantic Grand Prix Wrestling with friends. Lots of laughter and knee slapping through a chorus of colourful words happening in the living-room while wrestling was on.

The show would sometimes come to our small town, and I’d go with my Dad. "Leaping Lanny" was one of my favorites as a kid, and I only learned a few years ago that he is actually the late WWE superstar, "Mancho Man" Randy Savage’s younger brother.

When I moved to Toronto in 1989 my brother and I would go to pay-per view WWE (previously known as WWF)  bar events and attended some live matches at Maple Leaf Gardens when they were in town. It was fun to see these characters live. I still remember Hilly Billy Jim running around with his pigs, and how I loved to hate the late, Rowdy Roddy Piper.  My biggest wrestling event was being able to attend Wrestlemania VI, here in Toronto at the then, Skydome, where I witnessed the Ultimate Warrior defeat Hulk Hogan in the “Ultimate Challange” match.

I’m not sure why I stopped watching wrestling or even when really, but I took a very long break from wrestling, probably close to 20 years. Then in February of this year we had a free preview of the WWE channel. I was hooked! I honestly forgot how much I enjoyed it. I was thrilled to see some of the wrestlers I use to watch years ago still wrestling, or involved in other ways. Triple H, Kane, Big Show, Undertaker, to name a few. I was immediately drawn to some of the new talent like Roman Reigns, New Day, and Charlotte, so entertaining! When the free preview was over I went through wrestling withdrawals. I went without for 2 weeks, and then signed up. Thankfully Rob enjoys it too, it’s our favorite soap opera!

This past Friday WWE Live was in town, and off we went! We had a great time and great seats, 4th row floors. It was a blast to see some of the characters live that we have been watching on TV for months. I’m sure that won’t be our last WWE event, we had too much fun. 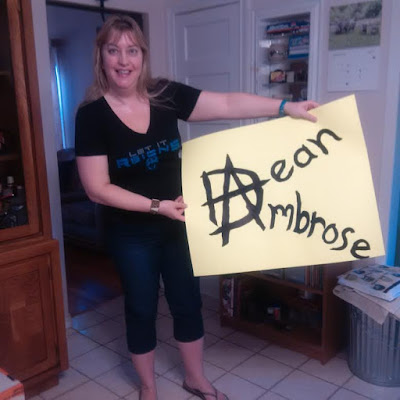 Rob and I got our signs ready!!! 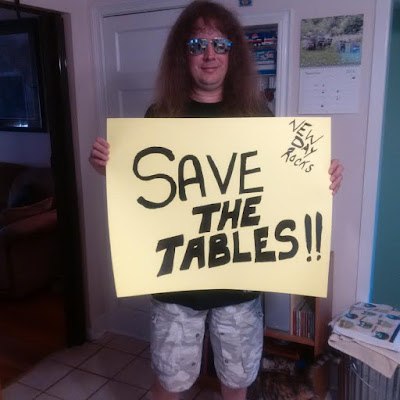 Here are a few pics from last Saturday's show. Pics not the best, the lighting was constantly changing, and those wrestlers don’t stop moving for long!

It bothers me when people say wrestling is "fake". It's not fake, it's sports entertainment. These people play characters and have story lines. I have a lot of respect for them, and can't imagine ever wanting to have my body thrown around a ring like they do.
Posted by Angie in T.O. at 8:18 AM

They are ultimate athletes as well as actors. I've been a fan for nearly 50 years! (not giving away my age much am I) LOL I loved Dominic Denucci when I first started watching. Thru the years some of my favorites were: Ultimate Warrior, Mr. Wonderful. Macho Man, Superfly, Jimmy Snuka, Jake the Snake, Kevin Nash, George the Animal Steele, Sgt. Slaughter, Stone Cold Stevens, The Rock and so many others. I love it and don't care what people think or say about it.