THE SHOT THAT ROB MISSED


Sunday morning Rob and I were up and out early to visit Rattray Marsh. He had been there on Monday and had some great sightings.

We went to a part of the marsh that I had not been to before and it was lovely. I found an area on the beach and sat down. It was a pleasant way to spend the morning, just sitting there trying to blend in, watching all the shore birds run and fly around; Killdeer, Great Blue Herons, different types of Sandpipers and Common Terns.

Less then ten feet away from me was a large dead tree with a limb that stretched out over the water, and I just knew if I waited long enough something would perch there. And sure enough, a Song Sparrow came over a couple times and sang from there. And then it happened, a juvenile Green Heron landed there. It was only the third time I had seen Green Herons, and the first time seeing young ones, there were 3 there. Unfortunately Rob was away talking to another photographer when the Green Heron landed so close to me, but fellow birder, photographer, and friend, Ann, was in whispering distance and came over to capture the great shot pictured above.

Rob did get some nice shots too, see below. Click on them to enlarge. 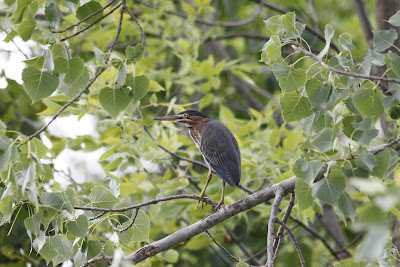 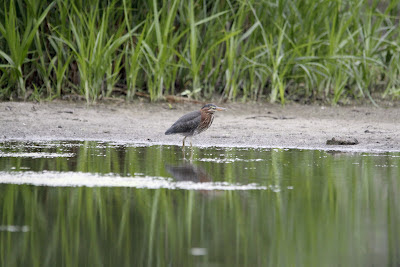 Hanging out at the marsh with the birds was a great way to start the day.
Posted by Angie in T.O. at 6:11 PM

That'll teach him from straying from your side. You are a gifted bird whisperer and attract our feathered friends.