I recently returned home from a 10 day trip to Okotoks, Alberta to celebrate the high school graduation of my oldest niece, Ashlee. I arrived the morning of June 27th and flew back to Toronto the afternoon of July 6th. Her graduation was June 29th, with a dinner banquet a week later.

It had been a while since I had such a long visit with my brother and his family, and it was nice to get loads of time with my nieces. The visit was a nice blend of a few touristy things, family time and the celebration of the graduate.

My nieces are a blend of my my brother and his wife, but I like to think I see a little of me in them both too. Ashlee and I have a mutual love of all things Harry Potter, reading and books in general really, and we both like to write.  She also likes to cook and try new recipes. I even rejoined the world of  'Pinterest" so I could start following her recipe board. Tayler is becoming quite the music fan, and I would be lying if I didn't say I was impressed with the variety of tunes on her phone, which she hooks up to whatever vehicle we happen to be in. She shut me right up when I said she probably didn't have any "good" music on it, and with a few clicks, the sounds of AC/DC's Dirty Deeds were blaring through the speakers. She listens to everything; rap, country, rock, 80's metal, the year it was released or the genre is not an issue with her, if she likes it, she likes it, and I love that! She's also a fellow foodie, who enjoys baking. I hope she comes to visit when she's 16, like her sister did. We would have a blast trying some Toronto restaurants.

I'm totally getting off topic, but even though they live thousands of miles away in Alberta, they take up a huge part of my heart. But back to my trip. I decided to do this blog a little different. I am going to post a few of my favorite pics from my trip, and then put a blurb about it below.

I love this pic. When I think of Ashlee's grad photos years from now, these are the photos that will come to my mind first. Dress rehearsal for the ceremony was on June 28th. She brought her robe home, and we both had the idea of getting some "Harry Potter" inspired pics. So on went her Gryffindor Scarf and out came the wand. "Accio, high school diploma!" 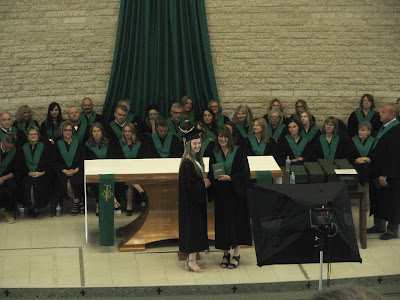 June 29th, Graduation Day. We were asked not to take pictures during the ceremony, as they had a professional photographer and it was being recorded. But how I could I not snap this moment?! (Her Mom did too) Congratulations Ashlee! 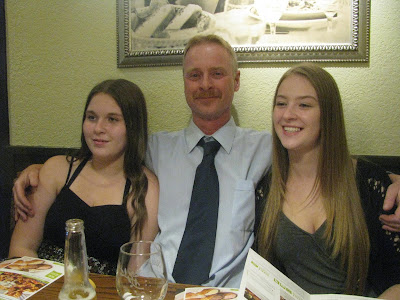 It was a long, and sometimes emotionally draining day, but we went out to the Olive Garden for a celebration dinner. We had a leisurely paced, delicious meal that allowed us to blow off some steam.  Sandy and I were both taking pics at the same time, and my flash didn't go off, but I still love this pic. I love how proud my brother is of his girls, and he should be. They are not only intelligent, they are kind. 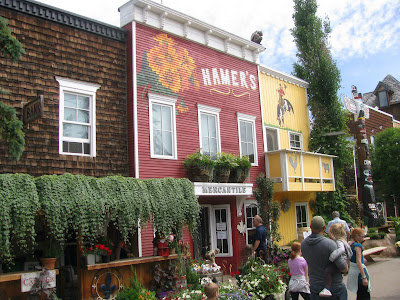 Jeff had to work on Saturday, so us girls went to the Saskatoon Berry Farm. I had read about it online and wanted to visit, and Sandy had never been. I liked how it was decorated like an old western town. Gifts, home decor, fresh vegetables, baked goods, an onsite restaurant and ice-cream shoppe. Whats not to like?! 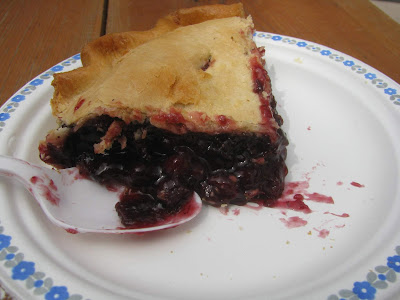 I thoroughly enjoyed my slice of Saskatoon Berry Pie, while the girls enjoyed ice-cream. I'm still kinda regretting not buying a whole pie. 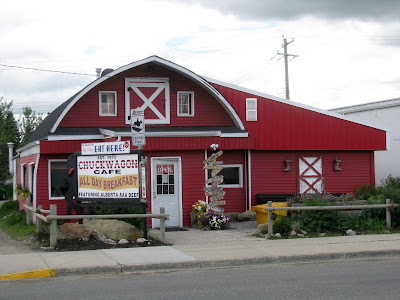 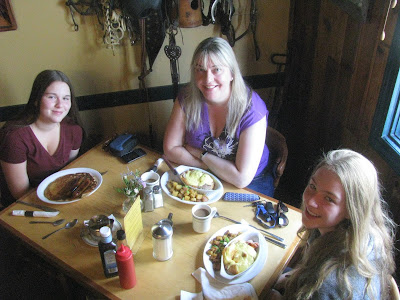 July 4th was "road trip" day. Both Jeff and Sandy had to work, so the girls and I hit the road. Ashlee wanted to take me to the "foothills" to look for Mountain Bluebirds. We started with brunch in Turner Valley at the "The Chuckwagon Cafe". This restaurant was featured on the Food Channel's "You Gotta Eat Here". Jeff was pretty envious that he didn't get to join us, as they had drove by many times but hadn't gone in to eat yet. I had the "Flat Iron Steak Eggs Benedict". If you are in the area, it's true, you gotta eat there! 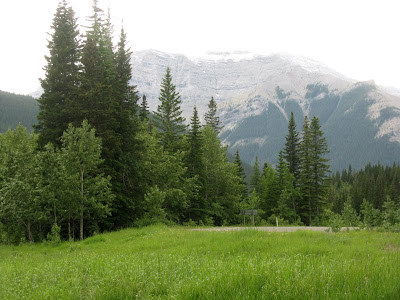 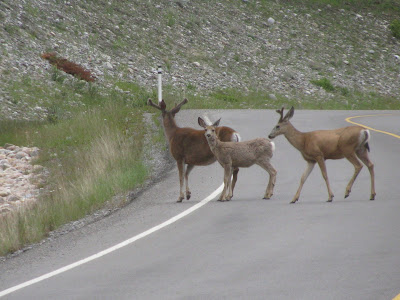 Though we never did spot any Mountain Bluebirds, and we did try to find some, the scenery was breathtaking. My big "birding moment" happened later that evening, but deserves a blog of it's own, so back to the road trip. 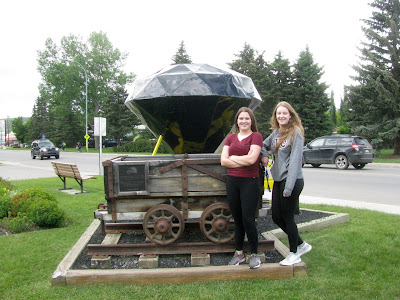 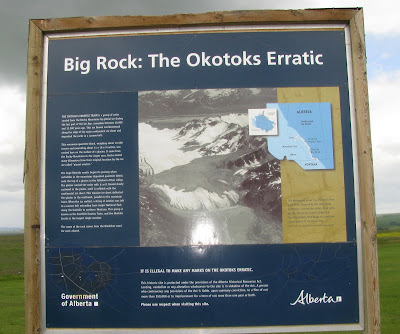 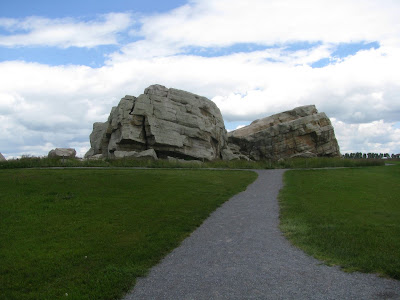 The drive was beautiful, and though I didn't take any pictures of them, I saw more cattle during that drive! They were all along the road, crossing the road, sleeping by the road....you get the idea! After a stop in the small town of Black Diamond for ice cream we made our back to the "Big Rock" just a short drive from their house. It's a glacier that made it's way there from Banff. I'm a bad tourist, I was more interested in the all the gophers running around. Didn't manage to get a picture of them either!

I know Ashlee was disappointed that she didn't find any Mountain Bluebirds for me, but it was nice to just spend the time with them both. 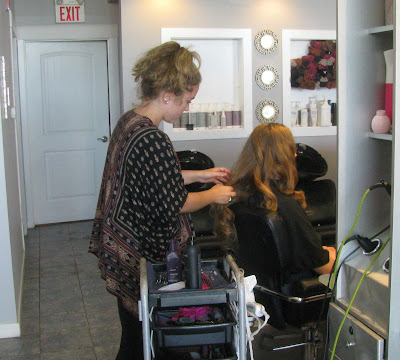 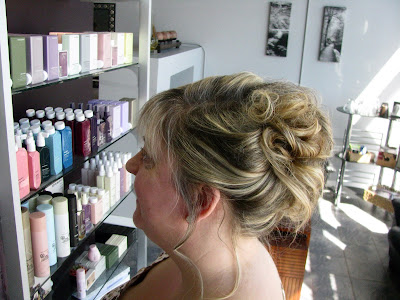 July 5th was banquet day, and Ashlee and I went and had our hair done in the morning. If was fun for me to do such a "girlie" thing with her. 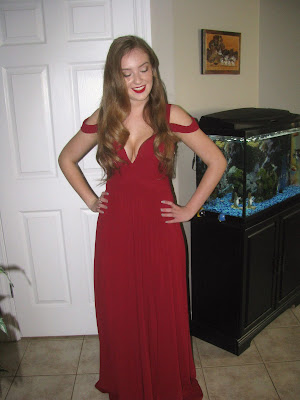 This isn't just a picture, it's a "moment" captured. It is minutes before her parents were about to drive her to the pre-party, and to take a limo to the banquet with her friends. Her Mom and I were snapping photos. This isn't a posed photo, this is her trying to recompose herself after laughing quite heartily at something I said. I was lucky enough to capture the moment on camera. 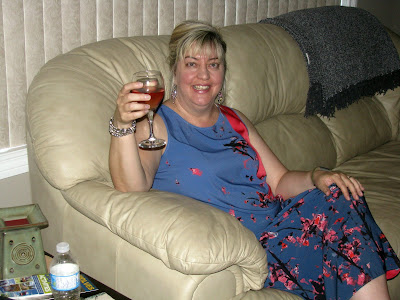 It was a great trip! I fretted a bit about being away so long, but it was fine. I'm glad I stayed for both graduation events. It was special to me to be a part of it all with them, and I hope to do it again in five years when it's Tayler's turn.
Posted by Angie in T.O. at 6:26 PM