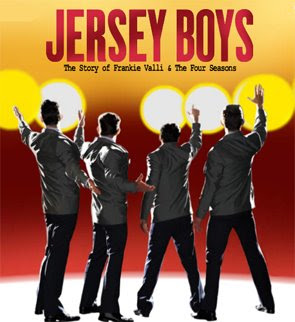 This past Tuesday night Amanda and I went to see Jersey Boys. It has been playing at the Toronto Centre for the Arts for a few months, and we wanted to see it, but hadn't bothered yet, but after getting the opportunity to get tickets for $30 each, we jumped at the chance.

Jersey Boys is the story of Frankie Valli and the Four Seasons. I love that era of music, but was surprised at how many of the songs were theirs.

It was a great show! It was hard to sit still and not sing along. The story was very interesting as well, of how they came to be, the story of some of the songs, and why they parted ways.

Toronto based actor, Jeff Madden plays Frankie, and is amazing. The whole cast was great, be he did stand out.

I had such a good time and enjoyed it so much, I plan on going again before its run is done at the end of May. Rob's going to join me this time, and I won't even mind paying full price for a ticket,
it's worth it.
Posted by Angie in T.O. at 8:16 AM

It's been forever since we went to a play.

I'm glad you enjoyed it. Alas, I've never been a Frankie fan :(