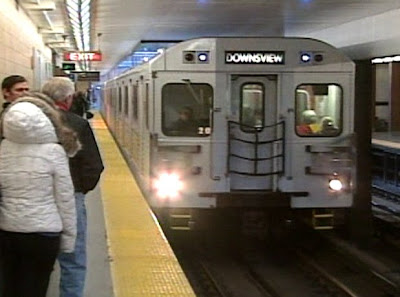 Before I moved in with Rob I had a ten minute walk to work every morning. It was very convenient, no rushing in the mornings, I came home for lunch, no afternoon "rush hour" to deal with. I lived this life of luxury for over ten years, and became very use to it.

It took me about two weeks after moving in to get my morning routine straightened out. I take a 20-30 minute bus ride to the subway, and then it's about another 20-30 minutes to work. I can do it in less then an hour, and on a good day, I've done it in 35 minutes! I don't mind the commute to work. I've adjusted my work hours so I don't have to deal with "rush hours", and I enjoy the extra time to read. When the weather is good I even walk home from the subway for the added exercise.

This past Thursday was a little different. I experienced my first TTC subway shut down. I was running late and was on it during morning rush hour when we all got asked to leave the train due to switch problems. There was no service between Keele and St. George. They were going to put on extra buses.

Well, it was crazy busy on the street, the buses hadn't started yet, the crowd was pushy and people were fighting for taxi's. Not fun. I didn't know what to do, I still had a long way to go, but was to far from home to go back there. I even asked a couple people for rides downtown!

I started walking. It was like a parade, hundreds of people trekking across Bloor Street. With the slow traffic it was easy to notice that most of the cars going along, only had one person in them, the driver. I couldn't help but think, if this had of been happening in the Maritimes, I wouldn't of had to ask for a ride, it would of been offered, but that is for another posting another time.

After I'd been walking about a half hour, I started to notice packed taxi's and crammed full "special ttc buses" going by me. No thanks, I had my runners on, and the weather was good, so I kept walking.

I probably walked 3-4 miles to work that day, and it took me an hour and a half. I wouldn't want to do that on a regular basis, but at least I know I can.
Posted by Angie in T.O. at 6:15 AM

Good walk for you!

And you're right ... in the Maritimes you would have been offered a drive. But I have to admit that I wouldn't offer anyone a drive here in Toronto ... ya never know what weirdo you'd pick up.

The King streetcar was messed up this week. I grabbed a cab one day, caught the Ossington bus/Queen streetcar another and went right for the Queen streetcar yesterday. Packed packed streetcars!