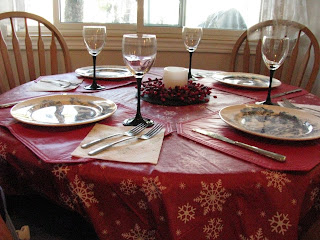 As a teenager visiting my grandmother I happened to mention one time, how much I liked her china, and that I would like to have it one day. It's Wedgwood, the Countryside pattern.

A few years later on another visit she told me that the dishes were wrapped and put away, and I could have them when she passed away. I was happy that she was going to let me have the china, which she hadn't used in many years, but thought it rather odd, that she wanted me to wait until she passed on to have it.

I mentioned this on my next trip home, because by this time I was living in Toronto, having moved there from Nova Scotia when I was 19 years old. I told my Nannie that I was happy she was going to let me have her china, but would really enjoy having and using it now. I wasn't sure how she was going to react, as she can be rather outspoken (a trait I inherited) but she didn't say too much, much to my surprise.

My words must of resonated, because it wasn't too long after I returned to Toronto that my Mother informed me that Nannie had made arrangements with a friend that was driving to Ontario, to deliver the china to me. That was fifteen years ago, and my Nannie is still very much alive.

I don't use the china as much as I should, but it has a place of prominence in the kitchen china cabinet where I can see it everyday. I can't help but think of her when I see it, and that's half the reason I wanted it, to have something to remind me of her that I could use.

We used the china yesterday when we had friends over for a big turkey dinner and all the trimmings. Eating off of those dishes is as close as I get to having dinner with family 51 weeks out of the year, and that makes using them very special to me. I'm glad my Nannie let me have that enjoyment now, while she is still alive.
Posted by Angie in T.O. at 2:44 PM

That's so nice that you have something from your grandmother.

I have a cheap pearl necklace that belonged to my father's mother (she's long dead and I didn't know her). But at least I have something of hers.

We both inherited Nanny's stubborn and outspoken traits. :D

I don't have much of Nanny's that I can think of. But one thing that always reminds me of her are molasses cookies. My mother-in-law makes them taste almost like Nanny's but not as perfect as hers. I'll never forget the perfect cookies with the perfect fork marks on them.

As I mature, I appreciate Nanny Levy so much more. I've learned so much about her since she's been in the Manor. I also inherited her willingness to try anything, and to go for it. I'm finally taking an adult learn-to-swim class and took a women's self-defense class. Nanny, in her 60s, became a nurse, learned to drive and so much more.

I always loved my Grammie's china too...but with my Mom and Aunt probably wanting it I didn't dare imagine I'd have it someday.

When mom had to clear out Grampy's house after he went in a nursing home (Grammie passed in 2001) my Aunt and Mom decided I should have it - they both have good china.

So it's up in my cupboard, waiting until I have a dining room and china hutch, but I am so glad to have it. I think of her when I see it too!